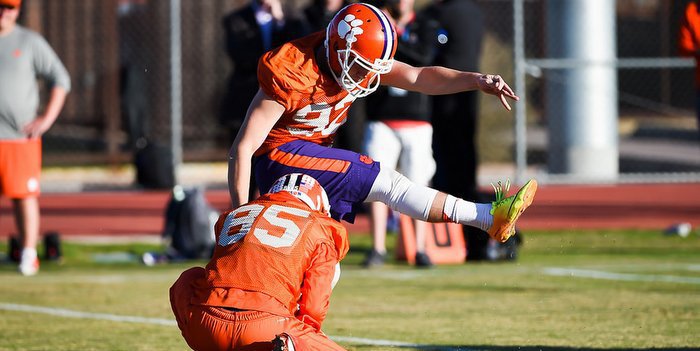 It's obvious that Greg Huegel has worked to improve leg strength

The media was allowed to watch the first five periods, which consisted mainly of field goal and punt work (no kickoffs) with a little offense and defense mixed in. We have a few observations from the limited time we were allowed to watch.

*Tight end D.J. Greenlee was in a yellow jersey, as was corner Marcus Edmond. Wide receiver Hunter Renfrow, who missed Saturday’s scrimmage while dealing with a hamstring issue, was a full-go at practice and spent a good portion of the practice returning punts.

*We watched several long field goal attempts, and it’s obvious that incumbent Greg Huegel has better leg strength this season. He drilled several from 40-plus, and his mechanics were smooth. Saying that leads me to Seth Ryan, who does a little bit of everything. The walk-on wide receiver helps call in plays for the offense, he plays wide receiver and he’s the holder on field goals. It’s obvious he loves being around the game, and being the son of a coach (his dad is Buffalo Bills head coach Rex Ryan) he understands it takes “glue guys” to make a team click.

*Sophomore kicker Alex Spence has improved dramatically since last season. He simply looks more mature and you can tell it when he’s out there kicking.

It's obvious that Greg Huegel has worked to improve leg strength"

*Several of the freshmen were missing from the practice. I walked over to the quarterbacks to see Zerrick Cooper and noticed he was MIA, which led to a search of the other freshmen like Trayvon Mullen, etc. From what I understand, there was a freshman convocation they were required to attend.

*A NFL scout was in attendance, and he said quarterback Deshaun Watson was “special.” We all knew that, but he said he’s been to see Oklahoma and Ohio St. already and that Clemson looks like those two teams, at least physically. He said Oklahoma was impressive, and that they look better on both their offensive and defensive lines (which is where they had problems with Clemson) and he could see Clemson taking on one of those teams in the playoff.

*I can always count on tight ends coach Danny Pearman to say something interesting, but Monday he took me by surprise. The music blaring from the speakers was a mixture of rock (Welcome to the Jungle by Guns N Roses) and rap (We Too Deep started the session), but as the tight ends switched fields, the music transitioned to Drake, and Pearman groaned audibly as he jogged by. He complained, “Oh good grief. Can’t we at least get some Snoop Dogg out here?”

Never thought I would ever hear Pearman utter those words.