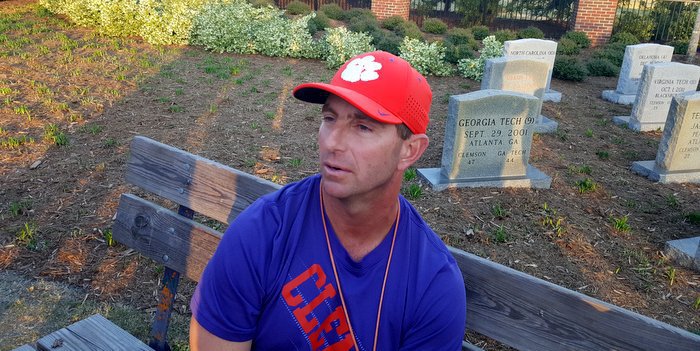 CLEMSON – Day ten is in the books, and head coach Dabo Swinney covered a lot of ground during his time with the media following Monday’s practice.

The Tigers practiced for over two hours on the practice fields behind Jervey in preparation for Wednesday’s stadium scrimmage.

“Day ten for us. Today was a slow it down, kind of teach some things day for us,” Swinney said. “There was a lot of separate done today. We went back and went through some things install wise on both sides and the same thing with special teams.”

“We lost [Adrian] Baker, but y'all all know about him. His surgery went well. Zach Riggs is actually going to be done. He's going to have to take a medical. He got hurt again, and he's going to have to have surgery. He's had three or four surgeries already, and he had surgery on Friday. It's going to be a long rehab for him. He's graduating in December, so he's going to be a medical. Baker, we'll get back. He's moving around already. They worked him pretty good today already. He's starting that process. Korrin [Wiggins] is doing the things he needs to do. Mike Williams is having a great spring for us. I think we've handled him the right way. His confidence is through the roof right now, which bodes well for us. We've had a couple of concussions that we've had to hold some guys, but we're starting to get everybody back healthy.”

“We talk all the time. Then I always have an exit interview after spring with everyone on the team. It's a full evaluation - academically, off the field, weight room, nutrition, plan for the summer, football position stuff, housing, you name it. We talk about everything, but Deshaun came in here with a plan. He is going to graduate in three years, and that is what he is doing. He, Artavis (Scott) and (Wayne) Gallman. Artavis is graduating in December in three years, and that was his plan. It is great when you have focused people like that. Hopefully, those guys stay healthy and have that opportunity to move on. I'm really proud of him. We talk about everything.”

Can Watson play in the NFL? (asked by ESPN’s David Hale)

“Did you ask me the Clemsoning question? Aren't you the same guy? I couldn't resist. (laughs). Let me tell you, there are a lot of teams that would have liked to have him this year, I promise you. His game translates to wherever. You want to play football on Mars he will translate there. He's unbelievable. He really is. The best as all of you know. He's a 10-star player and a 20-star person. He really is, and that is what makes him so much fun to be around every day. He is just always the same. He is always prepared. He is always working. Again, you don't graduate from college in three years. It is just incredible with the type of expectations and all the things he does to be able to balance all that. That is what just makes him so special. It's just how he is wired. He gets it. He takes such pride in who he is and his own personal brand and what he represents and things that are important to him. The football part is the easy part for him.”

“I've seen a completely different focus. Sometimes you have addition by subtraction. All of sudden a couple guys are not in the equation, and it's like ok and all the sudden bam. Guys blossom and step up. He has really answered the call for us this spring. I'm proud of Jadar. I really am. He is really doing a good job for us and is poised to have a big summer, and I think a big season. He's just got a different body language, different attitude, different look in his eye. That's what happens with a lot of these guys. Same thing happened with (Kevin) Dodd. All of a sudden, a of couple guys were removed, and it's a different deal. I'm hoping that Jadar will kind of be that Kevin Dodd for us this year. That guy that puts it all together and by the end of the year everyone is going 'Man, where did this guy come from? Because Jadar has the ability. He has got the talent to be as good as anyone we have had back there. He can do it all.”

“The guy I am proud of is Marcus Edmond. Same thing. Going to be a junior. He is a lot like Coty Sensabaugh was. Just kind of getting a little better. Got to develop physically. All of sudden you look up and wow. I just saw Coty Sensbaugh sign for $15 million and he didn't play here till his fifth year. I remember talking to the scouts before the year and I was like well, I don't know. Maybe. He can run, but he is just going to have to put it together. I had not really seen him be physical yet. He's got to put it together and buddy did he. By the end of the year we were like 'who is their guy? That's who Coty has got.' The rest is history. Fourth round pick and he has had a great career. I'm proud of Marcus. Marcus is a guy that can play. He has just kind of been that developing guy. A lot of times you forget about those guys because everybody is looking for Mark Fields. Everybody is looking for Mackensie Alexander. Everybody is looking for these guys that are physically gifted. You forget about Kevin Dodd. You forget about Marcus Edmond. Coty Sensabaugh. You forget about those guys. B.J. Goodson. But those guys are all improving and getting better. Marcus and Ryan and Cordrea and Mark Fields - that's a really good group and then Baker is going to be back. That's a solid group. All these guys can play and then you add in some of the guys that are coming in here. We are going to be just fine.”