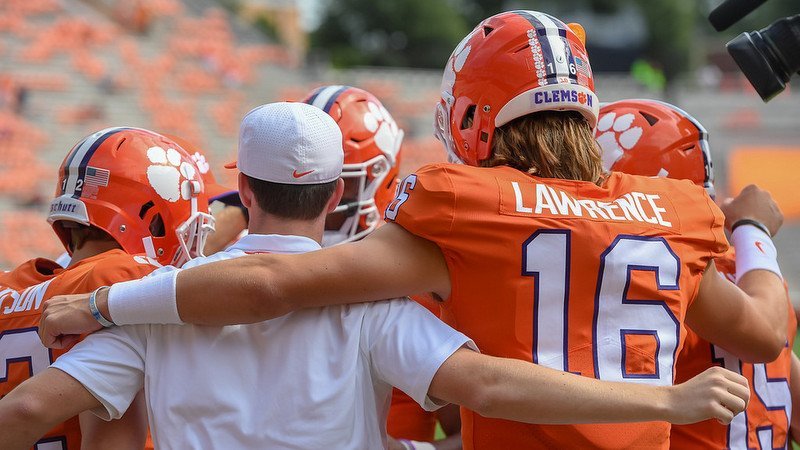 A top five Clemson team defeated Georgia Southern 38-7 Saturday afternoon in Death Valley, needing two late touchdowns to make the final score seem more “appropriate” to those who follow betting lines. Let's face it, in today’s world many fans like pretty wins more than they like a 38-7 victory in which a ton of freshmen and sophomores saw significant snaps early in the game.

It hearkens back to the old days when coaches would run up the score in order to impress the voters and the Bowl Championship Series computer system. Those days are over, and Clemson head coach Dabo Swinney knows that he needs to concentrate on winning his division and the conference title. Do that, and the College Football Playoff is almost a guarantee, provided they don’t win with two or three losses.

I've heard Dabo and the coaching staff say to trust the process so many times. Yet here we are, two days after a 31-point victory that pushed Clemson to 3-0, with fans complaining. I woke up with an inbox full of complaints on Sunday - they don't like 38-7. They would rather see Swinney go for 60 and win 63-0. That would make THEM feel better, to see the starters go into the 4th quarter and make it look good.

Yet there was Matt Bockhorst, a reserve offensive lineman, blocking on an early goal-line situation. There was Jackson Carman, getting snaps with the first team offense. There was Justyn Ross, making plays with the first team guys. There was Xavier Thomas getting snaps at Texas A&M and Saturday with the first group. There were youngsters all over the field Saturday. Dabo doesn't care about blowing people out, doesn't care about the rankings, and he's always been this way. Some people act so surprised and would rather win pretty than develop players.

So what happens if, heaven forbid, Mitch Hyatt gets hurt? You want a guy to take over who has only played in garbage time and never next to John Simpson? This coaching staff is making sure they take a team FULL of experience into the postseason and, here is a big takeaway, into next season when Hyatt and Ferrell and Wilkins and those guys are gone.

A whopping 28 different players had tackles on defense. Fourteen different receivers caught passes. Three quarterbacks played. I can’t even begin to count the number of offensive linemen that played, many of them in the first half when Clemson had yet to score a point.

It’s all about development, and Swinney and the coaches are building a team that will be better in November, December, and January than they are now. When the inevitable injuries occur there will be players with at least some experience stepping into the breach.

Swinney was asked about it on his Sunday night teleconference and he was asked if the strategy will pay off later this season.

"I just know that we try to play as many guys that deserve to play, as much as we can. We have a few guys who are 50-50, but as you've heard me say many times this guy may get 80 percent and the other guy get 20 percent," Swinney said. "But that 20 percent may be critical to that player and our team. So it's huge by the end of the year, a team with a lot of tread on their tires. I've had teams that were on fumes. We've always wanted to develop depth when there have been opportunities to do so. Plus, it creates competition. We'll do what we have to do to win. If we have to play one guy every snap, we'll do it. We've done that.

"We certainly want to play guys that deserve to play, too. And we want to do that in critical situations. That's how you get better. We're playing guys not just when the game is under control. It creates buy-in, trust, competition and depth. All of those things bode well for us."

Are there concerns? Absolutely. I wrote in the grades story that we have to see more out of the offense. To me, it’s still too horizontal and needs to be more vertical but the middle of the field was in play Saturday, and that’s a start. Tight ends caught passes, and that’s a good thing. The Tigers are also making plays down the field, something that had been missing.

The offense will get there as the coaches try to the find the identity for this season. For now, however, its about trusting the process. Ranked teams lost at home. FSU is 1-2 and in full rebuild mode. Wisconsin was a trendy pick for the CFP and was a 24-point favorite at home and lost. Southern Cal is a blueblood but was humiliated by Texas, a team that lost at Maryland.

Part of the disconnect for Clemson fans is the way Alabama looks, the team many think the Tigers will face later this season. The Tide look to be in peak form, but peak form in September usually means not playing your best somewhere down the road. It’s more important to be playing your peak football in November and December.

There are worse places to be than having a team that’s 3-0 and building to get better by the season’s end.