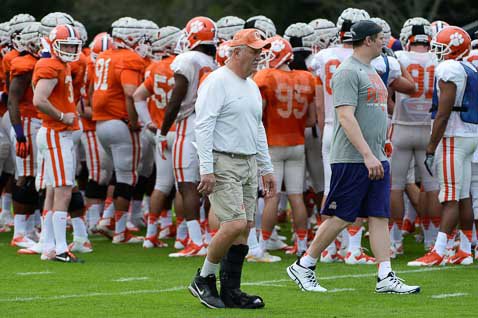 MIAMI SHORES, FL – The Clemson football team held the first Florida practice under cloudy but warm conditions at Barry University early Monday afternoon, and the media was allowed to watch the first portion.

The team gathered at the Barry University athletic facilities, where they will practice over the next four days, leading up to Friday night’s showdown against Ohio State in the Discover Orange Bowl.

The media was allowed to observe the first 20 minutes of practice, which included the stretching and special teams periods.

During Clemson’s finale against South Carolina, the Tigers turned the ball over twice on punt returns. The first was a muffed punt in traffic by junior Adam Humphries

Martavis Bryant
Jr. Wide Receiver
#1 6-5, 200
Calhoun Falls, SC
View Full Profile , and the second was late in the game when Humphries fumbled after a significant return.

After the game, many questions were asked as to who would be returning punts in the bowl game, and as of Monday Sammy Watkins

However, Monday was different. Not only were Pearman and Scott involved in the coaching, but so were Marion Hobby

The Orange Bowl and the Miami-Dade Police Department do a great job of getting the team to and from events and practice throughout the week, and the escorting police officers even go so far as to become fans of their team for the week.

As we were leaving the practice facility, the Miami-Dade patrol car driven by Sgt. Morales had a Clemson baseball cap in the dash and had even put Tiger Paw stickers on the windows to show his support.

It turns out that Sgt. Morales coaches youth football and is selected for Orange Bowl duty each season and he told us that he has escorted the Orange Bowl’s winning team eight of the last nine seasons, with the lone exception being Northern Illinois in the 2013 game.

Charone Peake
Jr. Wide Receiver
#19 6-3, 200
Moore, SC
View Full Profile were both at practice and without the bulky knee braces we’ve seen over the last few weeks. Both players tore ACL’s early in the season, and won’t be allowed to practice until the spring.

Defensive tackles coach Dan Brooks was walking around in a walking boot, and I asked how he was injured. It turns out he tore his Achilles tendon during the South Carolina game, kept coaching and didn’t alert trainers about the injury until after the game.

Brooks also opted to wait until after the bowl game to have surgery – he didn’t want to be on crutches during bowl preparations. Judging by the way he was running around the practice field, he made the right choice.

Bowl practice is really the first time many of us have gotten to see some of the redshirt freshmen in uniform, and running back Wayne Gallman was the one that caught my eye. He looks like he has added 15 or so pounds, and one of the staff told me that he wouldn’t be surprised if Gallman won the starting job next season. To put it bluntly – Gallman looks like the big back Clemson has been wanting. He is tall and the added weight made me ask former Clemson player James Trapp who he thought Gallman resembled.