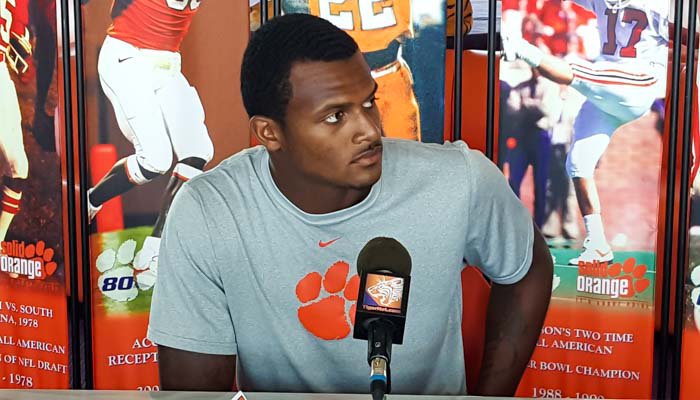 CLEMSON – Could Clemson fans see the Turtle Package at some point on the field this season? Probably not but it would be fun to see. Once.

Eric Mac Lain
RS Sr. Offensive Tackle
#78 6-4, 305
Hope Mills, NC
View Full Profile told us about the Turtle Package during the ACC Kickoff in Greensboro last month, and we started off Monday’s interview session in the WestZone with me asking Mac Lain if the package has gained any traction with the coaches.

“It should,” Mac Lain said with a big grin, who said he would definitely be the quarterback. “Ryan (Norton) would be the fullback, since that’s what he played in 7th grade because he was too small to play offensive line. Joe Gore

Joe Gore
RS Sr. Offensive Tackle
#73 6-5, 290
Lake Waccamaw, NC
View Full Profile , being the most athletic, would be our running back. Nobody could stop that triple option. Two hundred or three hundred yards a game, easy.”

Mac Lain then told the assembled media that Norton is a former swimmer.

“He swam until his junior year. He was very good. Very successful at it,” Mac Lain said. “He has a nice swimmer’s body when he isn’t playing offensive line. I think he came in at 240 (pounds). I weighed more than he did when we came in, and I was a tight end.”

Mac Lain is a nut, and interviews should be fun this year.

Mac Lain also compared Watson to Peyton Manning, saying that Watson can make all the line calls and protections. He then said the defense has done a great job of helping the offensive line get ready for the season.

“Our guys have done a great job of putting us in adverse situations whether the defense is blitzing 13 people and we only play with 11,” Mac Lain said. “They just do a great job of putting us in stressful situations where Deshaun can kind of call different things and we can all just feel each other out. I think throughout camp we have really developed a brotherhood and bond that will be very necessary throughout the season.

“I think that in years past that has been one of our biggest faults as an offensive line was our communication has lacked whether that was lack of knowledge of the offense or lack of knowledge of what each other can do. But I think throughout this camp our communication has been great. I think it is something we have been working on throughout the entire camp and it is something that is vital. In the offensive line when you are so close to the fire and people are doing so many different things that if you are not communicating thing are going to go wrong very quickly.”

“In case you didn't know it I am a huge Mitch Hyatt fan. This kid has done a great job. He's made numerous strides through each day. Like I said he has gotten that 1% better each day and the sky is the limit for him. He's really a great athlete, a great player and he is very smart. So the amount of the knowledge he has poured into his brain in a couple of months is amazing.”

Jay Guillermo
RS Jr. Center
#57 6-3, 310
Maryville, TN
View Full Profile is firmly entrenched as the second-team center and that Guillermo is a different person and player since taking the spring to get away from football. Elliott said that for whatever reason Guillermo is clinging to him, and the two have developed a close relationship.

*Per Elliott, it really sounds like running back Adam Choice

Adam Choice
So. Running Back
#26 5-9, 215
Thomasville, GA
View Full Profile will redshirt unless there is an injury. Elliott said the running back rotation right now is Wayne Gallman

Zac Brooks
Running Back (2012 - 2015)
#24 6-0, 200
Jonesboro, AR
View Full Profile . If there was an injury it sounds like Choice would have to play, but Elliott says that while he thinks Choice is physically ready, the Georgia native doesn’t fully trust himself or the knee and isn’t running with confidence. Elliott said that quarterback Deshaun Watson

Deshaun Watson
So. Quarterback
#4 6-2, 205
Gainesville, GA
View Full Profile hasn’t faced the same “mental hurdle” that Choice has faced when it comes to the knee.

Jeff Scott
Co-Offensive Coordinator / WR
View Full Profile spend time talking to Watson and Elliott said that too many voices can be a bad thing. As a result, they let quarterbacks coach Brandon Streeter

*Elliott said the coaches won’t coach Watson any differently because of his injury.

Lawson was asked how many tackles for loss he is looking for this season, and he said 23. When asked why that particular number, he smiled and said, "Michael Jordan. That's his number."

Clemson's starting safety said he likes to talk trash, and he and wide receiver Artavis Scott get into some epic conversations during practice.

I asked Kearse what opponent he remembers most, and he said Louisville wide receiver James Quick.

"I can't really get into all the details," Kearse said with a sly smile. "But that is the one I remember the most. It was pretty good. I am looking forward to that game."