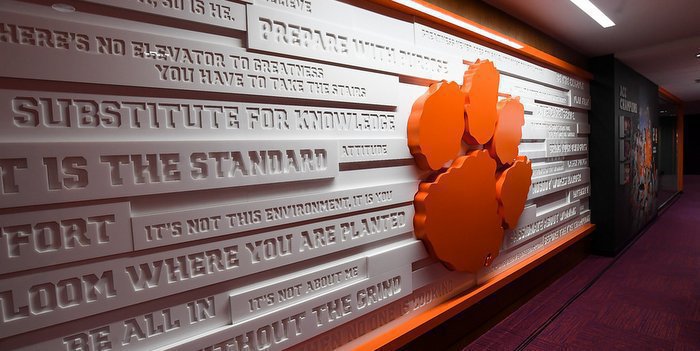 Clemson's new football complex will draw recruits from all over

Spring-like temperatures have dominated the weather in the Clemson area for much of the past month, and it’s no surprise since so many Tiger fans have been basking in the warmth and afterglow of a National Championship.

As we settle into a late February and early March routine of warm days followed by cold and blustery ones, I’m reminded that it signals the beginning of college baseball and the stretch run for college basketball. And somewhere in there, football spring practice begins.

We have final preseason interviews with baseball head coach Monte Lee and the players Tuesday in the dugout at Doug Kingsmore Stadium, and the season begins this Friday with a three-game set against Wright St. Lee and his staff have to feel good about the team heading into the season – the lineup is once again poised to score a lot of runs and the pitching staff has experience and a more settled feel to it.

I am sitting here feeling these 80-degree temps and the soft, warm breeze, and I wonder at the beginning of this time of year. The adage says that hope springs eternal, and as major league baseball players begin their trek to Florida and Arizona for spring training and college teams around the country gear up for a marathon that ends in June, there is always hope that “this could be the year.”

Clemson's new football complex will draw recruits from all over"

In football, “the year” happened in 2016 and the first part of 2017 for head coach Dabo Swinney’s squad. Spring practice begins on March 1st and there are plenty of questions surrounding this year’s team. We will of course get into all of those as spring practice approaches, but the biggest question of all is at quarterback as Clemson begins the LAW period of the program……..Life After Watson.

But there is plenty of reason for optimism in the foothills that surround Lake Hartwell – the new Clemson Football Complex is drawing rave reviews, and I’ve talked to a ton of recruits over the past few weeks who have either seen it and love it, or they’ve heard all the buzz and can’t wait to get to Clemson to see it. As Swinney says, if they can just get a recruit to campus then the coaches know they have a good shot at landing that player. Those chances have now increased, exponentially. Oh, and having a couple of National Championship trophies greet them in the lobby doesn’t hurt either.

For now, life is good when it comes to baseball and football. We will know more about both of those sports in mid-April.

Basketball is another matter.

If I had told you at the end of December that Audra Smith’s women’s basketball team would have as many conference wins as Brad Brownell’s men’s team (three each) you would have responded that either the women’s team had turned into a contender or the men’s team had fallen on hard times.

Well, Smith’s team isn’t a contender, but they’ve broken the long conference losing streak and are slowly showing signs of improvement. Is it enough to bring her and the staff back another year? I don’t know, and a lot of that is because Athletic Director Dan Radakovich isn’t big on telling the world his feelings and plans.

Brownell’s squad isn’t looking hopefully at the start of spring. Many thought that this was the year the Tigers could get back to the NCAA Tournament and perhaps even make a little noise in the ACC. But the Tigers have hobbled out to a 13-11 overall record and a 3-9 mark in the conference.

The good news? The Tigers play four of their final six games at home, and they play three teams that either trail or are tied with them in the conference standings. The bad news is that Clemson is just 8-4 at home – two of them by one point and by an identical 82-81 score – and there are 11 teams ahead of them in the conference standings. That means barring a miracle – winning five of the last six and then making noise in the ACC Tournament – the NCAA Tournament is out.

Speaking of the ACC Tournament – it’s hard on teams that are seeded 10th or lower. Seeds 10 thru 15 play on Tuesday, seeds five thru nine play the winners of the Tuesday games on Wednesday and then the top four seeds jump into the fray on Thursday. If you’re a ten seed or lower, that’s a tough draw, and that’s exactly what Clemson is facing.

Several people have asked what’s wrong with this team. I don’t think there is one thing you can put your finger on – they look lost at the ends of games, defensive effort is lackluster at times, and I’ve heard more than once that some of the player leadership is extremely lacking. It might speak volumes that it’s been junior Donte Grantham who has come out for interviews after a few tough home losses.

That brings me to the next question I get asked daily – will Brownell keep his job. The honest and simple answer is this: we won’t really have a gauge on that until the season is over. An AD can’t think and act like a fan. Sure, he can take cues from the low attendance in a sparkling new facility and the emails and calls I am sure he has received.

But there are six conference games left, and we don’t know how this team will respond. If they find a little magic and win four out of six and win a few games in the ACC tourney, that’s 19 wins, and they might be back on the NCAA bubble. If they win half of their games and win one or none in the ACC tourney, it might be NIT time. Would a lengthy run in the NIT carry weight? With a $3 million buyout on Brownell’s contract, it might.

So, at this point, it’s ridiculous to speculate. Heck, this team could lose five out of six and even miss out on the NIT. We just don’t know.

Until then, spring beckons, but the hope burns a little brighter in two sports than it does in another.