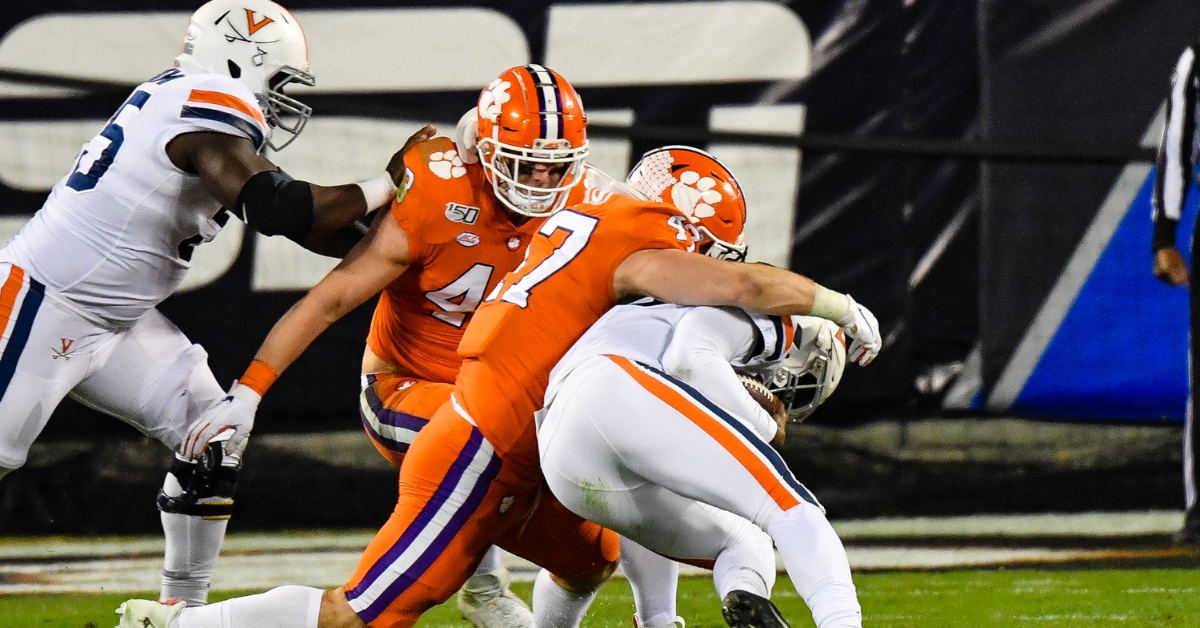 LB James Skalski and the Tigers are preparing for Virginia.

Players and coaches met with the media Monday afternoon, and here are some brief and edited notes from the interviews:

*Said Virginia QB Brennan Armstrong showed a lot of heart in the win over Duke, made the plays when it mattered. He said they do a lot of the same stuff offensively as last season, but he can’t tell a whole lot from one game.

*Used the downtime to watch a lot of film. Tried to stay safe. Lot of guys were on edge about wanting to play and stayed in the “Clemson Bubble” in an effort to stay safe.

*Watching some of the ACC games this past weekend, he said it is very competitive around the ACC. Says he knows everyone said it was a weaker conference but there are some teams playing some great football and they have to bring it every week.

*On the upsets this weekend, he said they were eye-opening, but they try to play their best every week whether it is The Citadel or Virginia or Miami. It’s hard to win and hard to keep winning.

*Says the team notices when Trevor Lawrence trends on Twitter on Sundays regarding his pro future.

*Elliott says that using the middle of the field was something they wanted to do this season after doing self-study, but he also says it reflects having a tight end who can match up there.

*Likes what he sees out of the second-team offensive line.

*On Virginia, they have some guys in different spots. Noah Taylor is playing safety, linebacker and defensive end so they are utilizing his skillset. Lot of communication between the corners. They play hard and have a lot of length and very versatile.

*Elliott says he is never surprised when teams sell out to stop Travis Etienne and the run and leave the game in the hands of Trevor Lawrence, because teams want to get an extra hat in the box and create pressure. But that also leaves 1-on-1 matchups.

*Feels in this day and age that you sleep good at night knowing that you have enough running backs that can play, as Clemson has, and not backs who are just situational guys.

*He feels like Coach Swinney not only did a great job of getting guys conditioned and get them reps during the pandemic but also in not overdoing it. He said they feel like they got some quality reps for everyone. The toughest issue is not knowing who will play each week but making sure everyone gets the reps they need. They feel very fortunate that they have players who are responsible and handling their business, staying out big crowds.

*He said he had high expectations for the OL, but he has been encouraged at how that has come to life. The OL has set the tempo and will only help them going forward. They all knew there was depth on the OL, inexperienced, and it has been good to see that depth grow.

* McFadden says he had a low-key off weekend staying around his house in Clemson and watching some football with teammates. Regarding upsets from the weekend, he says the team has the mindset that already helps in a one-game-at-a-time style to handle those games.

* McFadden says in the spring and then in fall camp he felt like the starting offensive line group could be special. He had been on the second-team with a core of those players who moved up and they already had good chemistry.

* McFadden says Virginia’s defense has some experience back and they will be a challenge. Says they are physical and play hard.

*Says Virginia has a great system the believe in. Armstrong managed the game really well. Thought their OL looked really good, have the most experience returning in college football at that spot. He said all of the offensive guys looked great. He said Virginia wanted to improve their run game and it looks like they have. Virginia just kept playing.

*He is not sure how much Tyler Davis will be able to play this week. Hopes to have CB Mario Goodrich back this week. “He is back, and it’s good to have another body outside to help us. He is a great kid and someone you pull for.”

*He said Virginia wore Duke down and ran 80-something plays. That is their identity but they will go as fast as anybody you will see.

*With so many LBs that can play, he has been pleased with the progress they’ve made and what they need to work on collectively and individually. A rotation is always fluid depending on the game plan and how they prepare. Very fluid with second and third-team guys and a lot is evaluated week to week in practice. A very selfless group of guys and he is excited. Said a lot of the guys have deserved to play.

*He said took a look at Virginia and says the quarterback is a great player. Not surprising to see him. He said the Cavs put up a big fight last year. They have some different weapons this year.

*He says the biggest lesson from last weekend is that anybody can beat you. The other team has scholarship players and want to win. He said they are focused on Virginia because they can win Saturday.

*Henry says the open date came at a good time and he was able to relax and go up and see his girl. He chilled and watched a little bit of Virginia. A good break.

*Henry said there is some good football being played in the ACC and he is glad some teams are getting recognition.

*He said he loves night games even though they are past his bedtime. He knows the fans will make it a great environment.