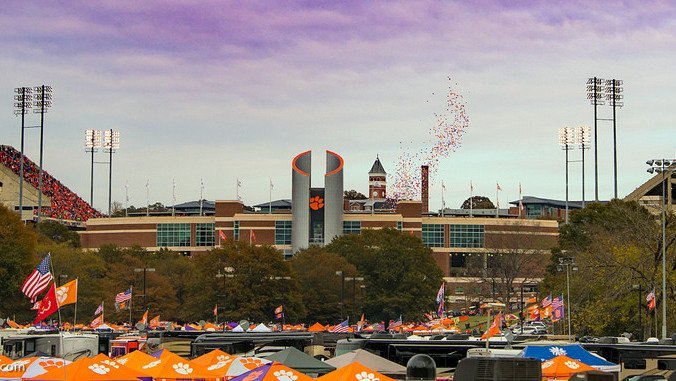 Soon, Death Valley will be filled with fans

Welcome to the longest week of the year.

College football gets underway this weekend, and even though I’ll probably watch a little of the Hawai’i at Colorado St. game and maybe tune in to the Wyoming at New Mexico St. tilt, the big games don’t start until next Thursday. That makes this, to me, the longest week of the year.

A week from today we will head over to the indoor practice facility for the first Monday/game week interviews of the 2018 season. Getting to next week? A long wait, even though the two-day wait after Wednesday’s game-week practice stretches into forever (or so it seems).

Clemson wraps up fall camp officially on Tuesday before starting classes on Wednesday. The Tigers will get the first day of classes off, will start preparation for Furman on Thursday, run through the Beanie Bowl this Friday and we will all head into game week.

With that in mind, we’ve got some additional intel to pass along.

*David Hood will be at Archer High School this afternoon for the commitment announcement of 3-star safety Jalyn Phillips of Lawrenceville (GA) Archer. For those of you that get a little too wound up about the number of stars a kid has, you can once again throw it out the window on this one. He has all the offers you would want, and he can play. We saw him in camp here in June, and he is one of those underrated guys that will make an impact on the next level. Hopefully, I will have internet access and can livestream it for you.

*The Clemson coaches handed out three scholarships last week to some deserving players. Longsnappers Patrick Phibbs and Austin Spence and running back Darien Rencher each were given a full ride. Congrats to all those guys.

*This is a great time of year if you live in the Clemson area. You can ride by the practice field and hear the band playing, the students are moving back in, and it’s great to see so many people in town. It’s just another reminder that college football is almost here. Whenever I am on campus, I of course drive by Death Valley. It really doesn’t matter what time of day it happens to be, someone is standing outside the gate looking in. In 12 more days that place will be electric.

*A lot of the buzz in camp has centered on freshman running back Lyn-J Dixon, but offensive coordinator Tony Elliott reminded everyone that Dixon has a long way to go.

"He's a relentless runner. With the ball in his hands, he finds a way to make a play. He's a lot bigger than his size, he's hard to tackle,” Elliott said. “He just continues to make plays. Still room for improvement in pass protection. He's a physical kid, he doesn't mind throwing it up in there. But from a knowledge standpoint, you're talking about going from the high school level to now you're going against coach Venables.

"Where he has exceeded my expectations is how he has picked things up. The first couple days he was making plays but didn't know what he was doing. Now you're starting to see him play with a little more patience and he's still finding ways to make plays. He's about where I thought he'd be from a protection standpoint. When you have pressure coming from all levels on the field, it's tough on a young back."

Elliott then dropped this nugget on us.

"There's a lot of competition, but Lyn-J is the guy right now that when he touches the ball he seems to be the most electric,” he said.

"You always want your best players on the field. We have shown the flexibility over the years, like in the South Carolina game we had Deon in the boundary and Tee to the field. It really depends on the development and progression of the guys, because in order for them to get on the field now they're playing a whole new position.

For opposing defensive coordinators, that is scary.

*Swinney told us that the scrimmage work is pretty much done (the Beanie Bowl will be full speed but will be thud), and the injury report is clean. Looks like everybody is either back or close to being back.

*Swinney had a great comment about defensive end Logan Rudolph after Thursday’s scrimmage.

“He is just a ball of butcher knives,” he said. “He flies all over the place, and he’s not always where he’s supposed to be, but something is getting hit and smashed. You love his demeanor and temperament.”

He also had a great quote about Clelin Ferrell and Austin Bryant.

*As for that opening weekend, I can’t wait. Thursday has Wake at Tulane and then Colorado vs. Colorado St. Some games I’ll be watching that Saturday are Texas at Maryland, Ole Miss at Texas Tech, Tennessee at West Virginia, UNC at Cal, Michigan at Notre Dame, Louisville vs. Alabama, and BYU at Arizona. I am not sure what Bobby Petrino was thinking when he almost guaranteed a win over Bama.

Sunday features Miami vs. LSU and Monday has Virginia Tech at FSU. That is going to be a fun weekend.