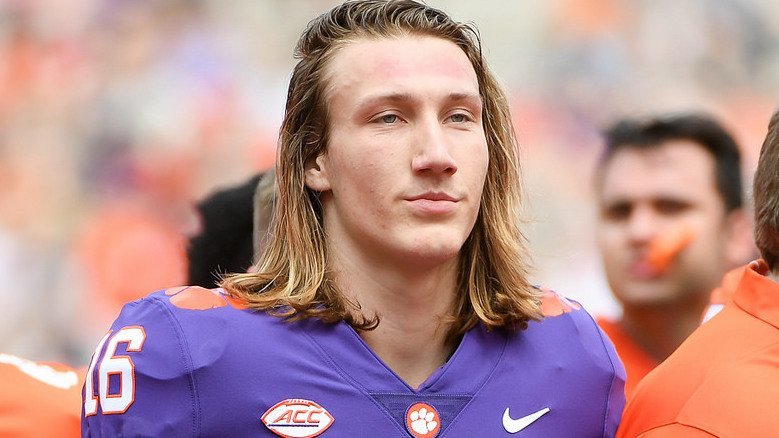 Trevor Lawrence doesn't get involved in trash talk on the field

CLEMSON – A little trash talk among friends? Nothing to it.

“That defensive line is the best. They challenge you,” Pollard said. “Christian runs his mouth. You know how it is. Christian is definitely the most vocal one over there. The offensive line talks trash, but Coach (Robbie) Caldwell gets onto us for talking back to them so we kind of keep quiet and go along with our business and let the pads talk.”

Which offensive linemen are the best at verbal wordplay?

“I would say Tremayne (Anchrum). He will go at it,” Pollard said. “He is quieter and he will say it one-on-one. But no one messes with John. That's a big human being and he's strong. I wouldn't mess with him. No one talks trash to him.”

Defensive Clelin Ferrell told the media that the Simpson narrative is not true.

“That’s so false. I got into a fight with John during a practice last year, that’s completely false.,” Ferrell said. “I don’t know what Sean is doing right there. John is becoming a really good player, he came in with all the physical attributes. He is really putting it all together this year. We definitely aren’t afraid to talk trash to nobody. John is a really good player for sure.”

Ferrell said trash talk is a part of the game.

“People take it as us, as we think we are so good. Whenever you can get in somebody’s head, you are basically one-upping your side of the game,” he said. “You are basically playing a game within the game. When two guys are battling it out, you’ve got to ask what’s another step you can take to have that edge, and it’s really that mental. We give ourselves another advantage. We just act like we make fun of them just to get in their head.”

One player that doesn’t get involved in the trash talk? Freshman quarterback Trevor Lawrence.

“He is just a laid back guy, any time you make a good play on him he just says, ‘good play.’ It kind of reminds me of the special on NFL Network about Andrew Luck whenever he gets tackled he says great hit man, good hit,” Ferrell said. “When Trevor throws a pick he always says great pick, and I’m like, ‘what, okay.’ I guess it’s just a way of blocking everything out, you know he really is just a laidback guy. He doesn’t get rattled much. He gets that sunshine reference because he just goes with the flow and is super laid back. It’s not sarcastic at all, it's really genuine.”

*Pollard says he was told before the spring he would move to right guard from right tackle. It wasn’t his decision but said he wants to do whatever it takes to help the team win.

Brent Venables said he is excited to see what linebacker Shaq Smith can do this fall.

“He’s done really well. I said it in fall camp and he’s had a really good fall. I’m excited about Shaq. He’s put a lot of work in,” Venables said. “I don’t like using the term breakout because I don’t like to predict but I do know he will contribute a lot more than he has. That’s because he’s earned it. He’s playing faster and more physical, he’s playing more sure of himself and he still has more growth to come and I think that will happen as well through experience.”

*Pollard said this year’s defensive front is different than any others he has seen.

“Clemson has been D-Line U for a while, and everyone knows about the great defensive lines that have come through. This year’s defensive line is just special in my opinion. I’ve seen the Vic Beasleys and the Grady Jarretts work,” Pollard said. “The defensive lines that I’ve worked against for the last three years are just great players and great people. They challenge you every day and make our offensive line better through that competition. We’re competing against the best of the best day in and day out and you to learn to block not only a great player but someone that knows what you’re doing.”

#Clemson DE Clelin Ferrell gives some insight into the QB they call ‘Sunshine’ and the mentality 5-star Trevor Lawrence brings in practice.