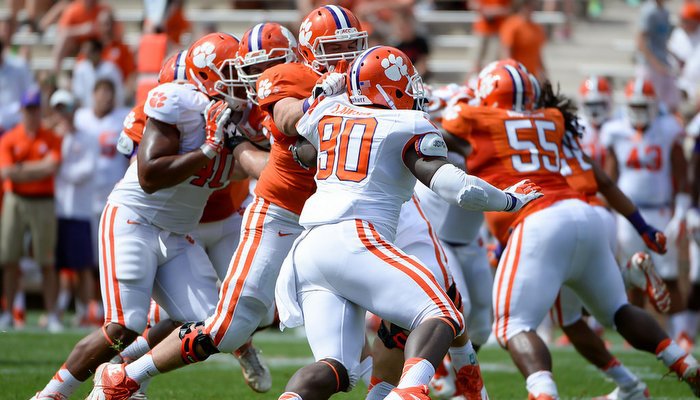 Shaq Lawson has vowed to make Hyatt a better player

Mac Lain arrived on campus way back in 2011 as a tight end and redshirted that season. In 2012 Mac Lain played 38 snaps at tight end and 10 at offensive tackle over 13 games and it was during the 2012 season that Mac Lain finally made the permanent move to the line. He played 140 snaps in 2013 and 240 in 2014, but finally gets his chance to start this season.

Hyatt is on the opposite side of the ledger. He was a 5-star left tackle prospect coming out of high school in Georgia, and he enrolled in school last January in an effort to get acclimated to the Clemson offense and add weight and muscle. Following spring practice, Hyatt was projected to back up starting left tackle Isaiah Battle

Isaiah Battle
Offensive Tackle (2012 - 2014)
#79 6-7, 290
Brooklyn, NY
View Full Profile and earn valuable snaps this season without the pressure of starting as a freshman.

That all changed in June when Battle decided to enter the NFL’s Supplemental Draft and Hyatt was thrust into that first team spot. Mac Lain plays to Hyatt’s immediate right on the line and has had a front row seat for Hyatt’s development during fall camp and says he has been impressed with the rookie.

“In case you didn't know it I am a huge Mitch Hyatt fan,” Mac Lain said this week. “This kid has done a great job. He's made numerous strides through each day. Like I said he has gotten that 1% better each day and the sky is the limit for him. He's really a great athlete, a great player and he is very smart. So the amount of the knowledge he has poured into his brain in a couple of months is amazing.”

Mac Lain said Hyatt has gotten more comfortable in his role as August has progressed.

“This guy has always been a five star and been a great player. I think he kind of forgot that when he first got here where his footwork was a little bit sloppy and his hands,” Mac Lain said. “But as he has progressed through camp you can see the confidence he has been playing with. He is going against one of the greatest defensive ends in the league probably every single day and that has just made him better and better. So I think his confidence has been built so high and just helped him develop as a player.”

Shaq Lawson
Jr. Defensive End
#90 6-3, 269
Central, SC
View Full Profile has gone head-to-head with Hyatt during fall camp, and early on it was evident that Lawson was winning the majority of those battles. Mac Lain said that Hyatt was now holding his own against the speedy and physical Lawson.

“I think for a freshman he has held his own where he is almost at a point where he is winning 50% of the battles now,” Mac Lain said. “Shaq is still a great player, but when you have two-on-one sometimes where I can help Mitch out it is pretty hard to beat.”

Lawson agreed that Hyatt has improved dramatically since the beginning of camp.

“He has gotten better since day one, since the day camp started,” Lawson said. “He has picked up on a lot of my moves and he knows me, but I like to challenge him every day and make him better. A couple of plays I will get him and then he will come back and get me the next couple of plays. I want him to be the best freshman linemen in the nation.”