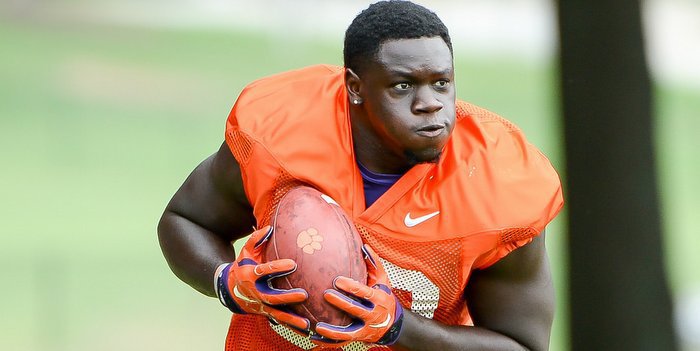 Milan Richard didn’t catch a pass as a redshirt freshman during the 2015 Clemson football season.

But the 6-foot-2, 250-pounder thinks his versatility and size will help expand his role during his sophomore season in 2016.

“Here, at this level, it’s all about matchups,” Richard said. “I think any time, as a coach, you want that player who can do multiple things and you don’t have to substitute for different packages. Definitely, I think if I can block and run routes, that’s definitely a plus for our team and for myself.”

Richard said he is working on that entire package through the spring to get more time on the field next season.

“Mainly technique,” Richard said, when asked what he’s focusing on. “Over the bowl season and over last year, I’ve kind of learned what I’m supposed to be doing. So now, it’s just more becoming a technician and knowing how to do it all the time. I just think the versatility, with my size, being able to stretch the field and being able to get in the box and block, just the whole versatility part of my game, I think that’s just something I bring that to the table. I mean, Jordan (Leggett) brings that, too. I think we all bring that as tight ends.”

Leggett is definitely the leader of the tight end corps after catching 40 passes for 525 yards and eight touchdowns last season. The rest of the group is made up of Garrett Williams, Jesse Fisher, Cannon Smith and D.J. Greenlee.

“I think it’s a healthy competition,” Richard said. “We all pull for each other, and we all want each other to do good. At the end of the day, I think we all make each other better.”

“He just wants the best for you. He tells us every day he’s our biggest fan,” Richard said. “Sometimes it’s hard to believe that. I really do think he wants the best for us, and he’s always pushing us, in the meeting rooms and especially on the practice field. So I know it’s just a tough correction, and I’ve just got to learn from it and move on.”

Richard also said he learned from last season and has been patient through the process of moving up the depth chart.

“I wouldn’t necessarily say it was tough,” he said. “I understand where the coaches were coming from. You’ve got to do what’s best for the team. I understand I just kind of had to wait my turn a little bit. So I wouldn’t say disappointed or it was a tough year because I was contributing where I could and when I could.”