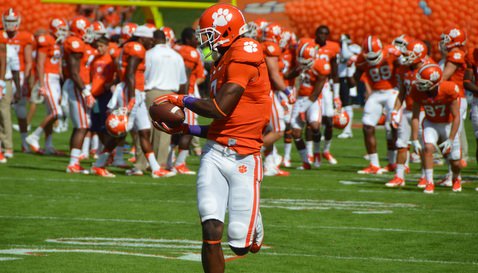 Mike Williams
So. Wide Receiver
#7 6-5, 205
Vance, SC
View Full Profile will more than likely line up at the “9-man” receiver position this season, a position made famous at Clemson by the likes of Nuk Hopkins and Martavis Bryant

The 6-3, 205-pound sophomore out of Lake Marion High School had 20 receptions for 316 yards and three touchdowns in 404 snaps over 13 games (three starts) a year ago while backing up Bryant and Sammy Watkins

Sammy Watkins
Wide Receiver (2011 - 2013)
#2 6-1, 205
Fort Myers, FL
View Full Profile . This past spring, Williams practiced almost exclusively at the “9” or boundary receiver position, and he told TigerNet that he wants to be the go-to guy in Clemson’s offense.

“Now that Sammy is gone, I am trying to take that role and be the guy to go to,” Williams said. “I feel like I am that type of player. I want to be that go-to guy, and I feel like I am taking on a leadership role. I really don’t have a personal goal as far as stats, but as a group I feel like we can do what Sammy and Tay did. We just have to go out and continue working. I just have to keep working on my route running and my releases. “

“I gained a lot of confidence from that. I gained confidence just going against Bashaud Breeland

Bashaud Breeland
(2010 - 2013)
#17 6-0, 195
Allendale, SC
View Full Profile last year, and now me and Mackensie (Alexander) are going against each other,” he said. “We are getting more confident. Mackensie is a great corner and we have been competing every day.”

The loss of Watkins and Bryant means that the younger receivers will have to step up this season, and Williams said he is trying to be a leader both on and off the field.

“It’s different this season,” he said. “We have a lot of younger receivers. “But we are all great athletes, and we are all out there competing. The young guys just have to step up. I am trying to be a leader. Whenever Coach (Jeff) Scott is working with somebody, he tells me to go and work with the rest of the guys because he knows I know all of the positions. I am pretty much trying to help out with everybody.”

“As you can see, both Nuk and Tay both played nine man and both played three years and left for the NFL,” he said. “They are both great athletes, and I am just trying to follow in their footsteps.”

*From his official Clemson bio.