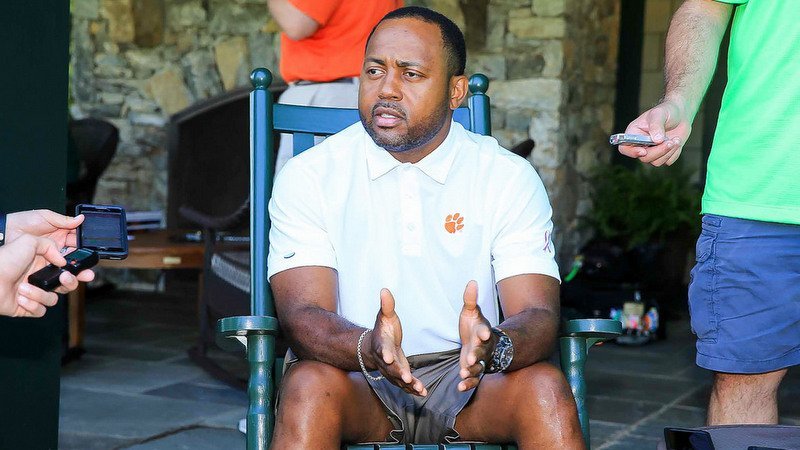 Mike Reed talks to the media

SUNSET – Cornerbacks coach Mike Reed has talent across the board in both his returning players and incoming freshman, but depth could be his biggest concern.

Reed met with the media at head coach Dabo Swinney’s media golf outing at the Reserve late last month and said he intends to have every available player ready to contribute when the Tigers kickoff on Sept 2 against Furman.

“We've got some guys who have played a lot of football and then some guys who haven't, so for me it's trying to get those younger guys up on the level with the older guys so they can be used,” Reed told TigerNet. “I'm a firm believer that if I'm going to a gun fight, I'm going to shoot every bullet I've got. That's the challenge right now to make sure that those young guys get up to the level with those older guys and then make sure those older guys are becoming very, very consistent.”

When freshmen Kyler McMichael and Mario Goodrich signed with Clemson, Reed said they both knew they might be counted on right away and he expects them to be ready.

"Yes (depth is a little bit of a concern), but that's that why you have to make sure those younger guys are equally ready to play because at any given time you're one play away from playing," Reed said. "Those guys who have elected to come to Clemson knew that when they were being recruited. They know.

"The plan is for them to play. I may die tomorrow. I want to be able to see these kids play now. For me, I've got to get them ready to play for game one then we'll go for them. That's the plan."

“I think he could (have an All-American year). I hope and pray he does. I like his focus. I like his work ethic. I like the accountability. I like the fact that he's adopted a leadership role amongst the secondary and the team.”

The battle between Mark Fields and A.J. Terrell

“They are battling. Right now, it's a three-way rotation, so all three of them will play. My thing is, it doesn't matter who starts because if you do what you're supposed to do you'll all play.”

“He's got to be consistent. For me, consistency is a must. You can't have one play, then you take 10 plays off, and then you give me another play. I've got to have that consistency where I have to be able to count on you when I'm not looking at you so that if something is happening, I know that LeAnthony knows what he's doing. For me, it's consistency. He's matured a lot in the weight room. He's put in some work and his body has changed, so I know physically he's ready to go out and play college football.”

On Mark Fields playing with a chip on his shoulder

“It does but you have to learn how to channel it. It's like a guy who gets in the boxing ring and he's throwing haymakers all day, he's liable to get knocked out because he doesn't have his defense up. It's one of those things that you have to channel it and understand that it's a motivating factory. You can use it but you can't let it get out of control.”

“It's what I expected when we recruited him. A kid with high football IQ. Very physical. Even though the body didn't match up to his physicality. A kid that can run. I was quite pleased. I love the transition that he's made from his true freshman year to now.”

On if K’Von Wallace could play corner this season

“K'Von can do it and if you listen to him he wants to. He loves it. He loves the opportunity to get out there and be in press (coverage) and be one-on-one and play corner.”

“Physically, he's ready to play now. He's a195-200 pound kid, fast, explosive, can do a lot. He was a highly regarded offensive player. Some people say he was the running back in the state of Georgia last year so you've got a kid that's very dynamic. He likes to work hard. He likes contact. That’s the kind of kids I want to work with.”