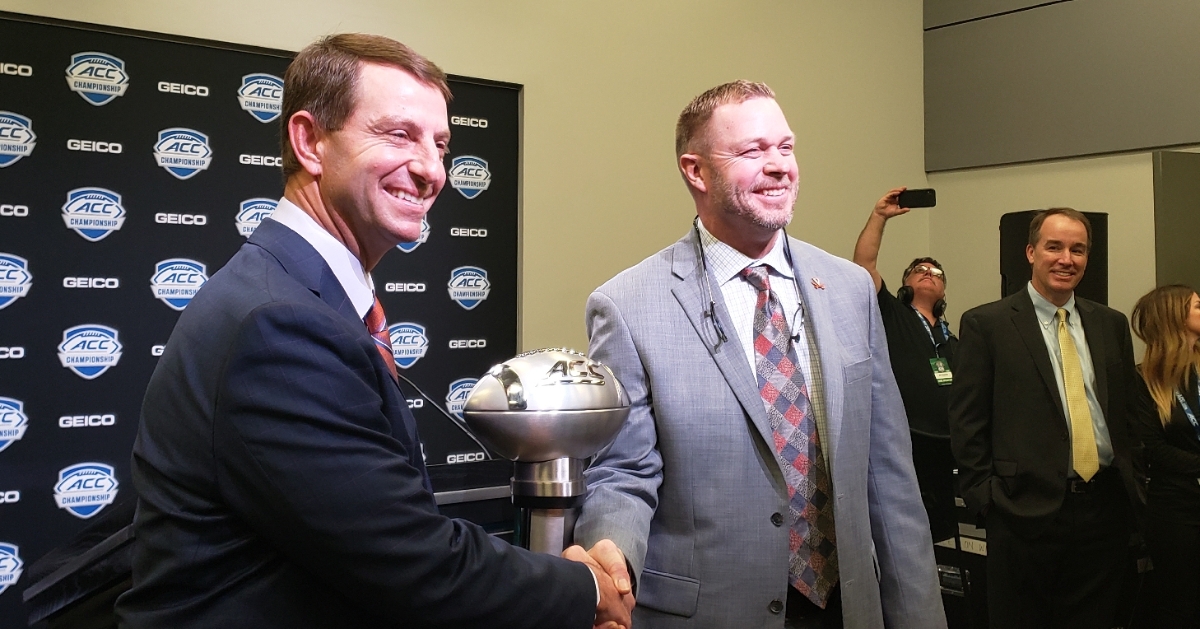 Swinney and Mendenhall shake hands in front of the ACC Championship Trophy.

CHARLOTTE, NC – Virginia head coach Bronco Mendenhall and his Cavalier football team walked into Bank of America Stadium Friday afternoon and took in the sights and sounds of the ACC Championship. Sure, some of them were wide-eyed, but Mendenhall doesn’t want to take away their excitement.

No. 3 Clemson (12-0) plays Virginia (9-3) at 7:30 p.m. Saturday (ABC), and Mendenhall said during the coaches’ press conference Friday at the stadium that he doesn’t intend to stop his players’ excitement.

“They're so full of optimism and hope and excitement. I'm not getting in the way of that. This is a moment they have earned. I don't intend to taper it,” Mendenhall said. “I intend to have them channeled into their assignments and position mastery.

“We're excited to be back. This is a blast, man. This is so much fun,” Swinney said. “I was telling our guys this morning just how much fun it is to be a part of championship football. I don't care if it is the 95-pound peewee league, your middle school team. I asked how many of you won a state championship? Some raised their hands, others. It is just when you know that you're going to be ready to go play a game and there is finality to it like you have 14 teams that have been battling all year for the privilege to play in this game, its special.

“I know we have been here several times now. Let me just tell you, it is such a blessing. We're just grateful to have the opportunity. It is a privilege to be here and just so proud of our team and our staff for all the have work that's been put in to get back to this point. You know, we're super excited to represent the Atlantic, and a great venue, Charlotte, just doing an amazing job up here. Got a chance to walk out on the field. The field looks great. I know it will be an awesome crowd.”

The Cavaliers played in Bank of America Stadium last December, defeating South Carolina 28-0 in the Belk Bowl, and Mendenhall says that familiarity can only help this team.

“I think it does matter because it is a long-term memory that's facilitated by a number of things, one of them is a significant emotional experience,” he said. “I just walked out on the field and I felt good because it was associated with our win over South Carolina, and that's a positive thing. And it's a -- it has a level of confidence and takes away some of the unpredictability.

“Now, we weren't playing Clemson. It is a different opponent. I haven't coached against Clemson nor has our team played, but the setting is at least one less unknown before we play the game and that's a good starting point.”

Mendenhall said it doesn’t take long to see Clemson’s elite playmakers on both sides of the ball.

“Well, when I turn on Clemson film there's a lot of players that are really good. Just the sheer volume of capability by number is something Clemson has done a really nice job of, the talent selection process, certainly the metrics they're looking for,” he said. “But then the ability to attract that many and maintain that many, keeping those kinds of players happy.

“Playing is more fun than watching. When you become an elite player as he is, then schematically there are things you have to do to account, but there are enough other quality players on the field where if you put undue attention on any one player, the trade-off really doesn't warrant it because someone else is very capable and I have been impressed.”

He then went on to say that Clemson’s coaches do a great job with keeping things simple, and it’s that simplicity that allows Clemson to make opponents pay.

“I would say simplicity (is what stands out the most to him). I think the most masterful coaches are the ones that keep asking the question what don't we need? It is really easy based on hours to keep adding things and to keep adding things and let's do this, let's do that, let's do this,” Mendenhall said. “I think the very best coaches are the ones that we don't need this, we don't need this, but they have enough to complement which means as a defensive coach if you defend this you already know the trade-off you're making and you're giving up something else, and if within the scheme they have a complement to that trade are-off they make you pay. And Clemson does just that.

Swinney said he understands the excitement in the Virginia program as he recalled his first ACC Championship Game with the Tigers, a loss to Georgia Tech in Tampa in 2009.

“It was amazing. It really was. My first year in '09 we won the division and got to go down to Tampa and play and that was a tough night,” Swinney said. “Neither team punted. It is the only game I have ever been a part of where not one team punted. We couldn't stop them, they couldn't stop us. We lose down there. It was a tough night. It cost us the chance at the Orange Bowl. My first year, I'm like we're going to win the ACC, this is the greatest thing ever! We got beat. Then in '10 we didn't have a great season, my second year.

“To come back in '11 and to be able to win ten games, to win the league, to beat a top ten Virginia Tech was amazing, it really was. Especially, again it had been 20 years since that time since Clemson had won an ACC championship. It was a magical moment. I talked to Eric Mac Lain about it earlier today on the field. It was a special, special moment to celebrate with our team. We got back that night. Probably 5,000 fans were out there waiting on us. It was just -- there was this hunger and we didn't play well in the bowl game that year. I didn't let that distract us from what we had accomplished. I mean, we had accomplished some landmark things, ten wins and winning the ACC in just our third year playing for the second time. It was -- and having lost in Tampa to get there and win was really, really special. It was a special, special moment, something I'll never forget. In fact, I showed video of that to the team before I came up here. You know, I think it is always good to remember how you got here.”