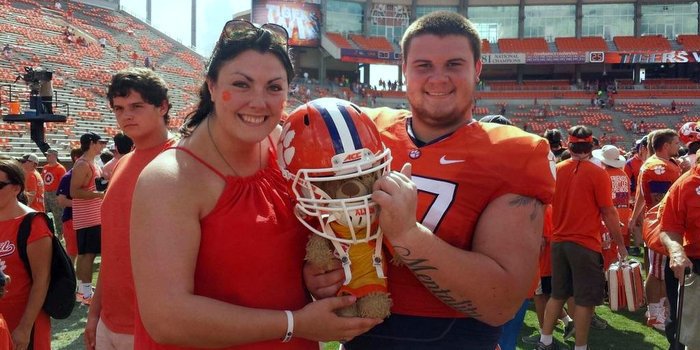 CLEMSON - When the Clemson charter flight leaves from Greenville-Spartanburg Friday morning, making the short hop to Winston-Salem, Harold will have his own seat beside center Jay Guillermo.

It's a seat Harold has filled on plane rides and bus rides for three years now, and Guillermo and other players can't imagine any kind of trip without Harold leading the way.

Did we mention that Harold is a teddy bear?

Harold is a bear that Guillermo and his girlfriend, Ava Bell, made together. Bell and Guillermo met at Clemson – she was a thrower on the Clemson track and field team.

“One day, me and Ava were in Greenville, and I wanted to do something special because it was a date night day. I went to Build A Bear, and we built a bear,” Guillermo told TigerNet recently. “After it got done, we were trying to pick out a name, and I was like, 'Let's call him Harold.' He's been our little buddy ever since.”

However, it was Guillermo’s idea for Harold to start traveling with Bell during her first year on Clemson’s track and field team.

“When we first got him, it was January 21st, and it was my first year traveling for track because I redshirted my first year. I had traveled a little bit the year before but this was my first year getting to go to big meets and actually being competitive,” Bell said. “Jay started sending me off with Harold as my good luck charm, and he traveled all over the country with me - Texas A&M, University of Arizona, Notre Dame. He went everywhere. He would travel everywhere with us because he was the attachment that went everywhere, and then football season rolled around. I had a really good track season and Jay said, 'Well, I think he's a good luck charm,' so I told him that he should take Harold with him.”

It wasn’t until 2012 that Harold made Clemson football’s travel squad, but since his arrival, the Tigers have been winning at an unprecedented pace.Meet Harold: Clemson football's traveling good luck charm

“Ava brought him to the Chick-fil-A Bowl and the Orange Bowl, and we won both of them, and she started bringing him to games, and we started winning games,” Guillermo said. “We were like, it's obvious that Harold is our good luck charm, so then he started traveling with me. All of the guys know about Harold. I take Harold out on the plane and sit him on the seat beside me. Everyone knows Harold. They'll all laugh at me, but they'll say, 'Hey if he's good luck then we can't make too much fun of you.’ He started traveling with me and then he started coming to Tiger Walk. He always has to be in the stands during home games, so I'll give him to Ava and then during away games he sits in the locker room.”

Harold doesn’t just travel with Guillermo, he also participates in Tiger Walk and watches all homes games from the stands.

“Jay wanted him not to be in the locker room so he could watch him play, so he comes and sits out with me during home games. We trade him at Tiger Walk,” Bell said. “He has a special jersey. He always changes from his suit for Tiger Walk into his outfit for the game.”

There are even pictures of Harold cheering on the Tigers.

“He sits with Ava and my mom, but during big plays, my little brother would take him and hold him up like Simba from the Lion King,” Guillermo said with a laugh. “It was funny because someone got a picture and you can't see my little brother. All you can see is a teddy bear up in the air. That's just Harold.”

Most people probably think that Guillermo’s teammates would probably give him a lot of grief for carrying around a teddy bear, but Guillermo said he probably gets the weirdest looks from TSA agents who are checking bags before road trips.

“It's funny to see when we go through TSA checks, and I get randomly selected, and I'll walk over, and they open up a bag and see a bear,” he said. “They just look at me and ask if he's mine. It's pretty funny to see their reactions.”

Guillermo said that offensive guard Tyrone Crowder’s reaction to one of Harold’s first plane trips was by far the best. 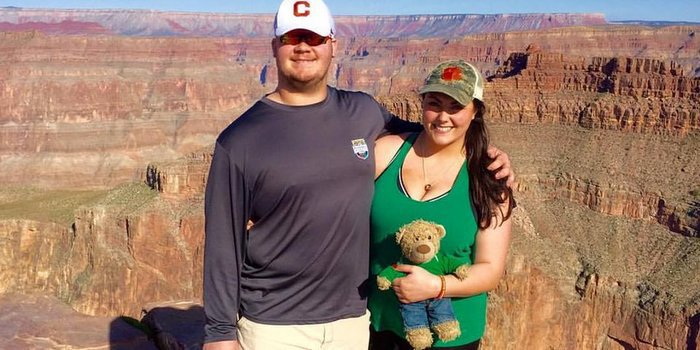 Harold at the Grand Canyon with Jay and Ava

“It was probably last year when I first started bringing Harold with me to travel, and I was sitting beside Tyrone (Crowder). We have three seats, and there's one in the middle because they didn't want some poor soul to have to sit in between Tyrone and me,” he said. “I took Harold out of my bag and sat him in the seat, and Tyrone looks at me and looks at Harold, and he's like, 'Dude, what is that?' I tell him, 'This is Harold. You know Harold,' and Tyrone asks, 'Why is he out and sitting in a seat?' I just told him that Harold had to have somewhere to sit. Tyrone's mind was blown that a 21-year-old man was going to bring a teddy bear with him everywhere he goes.”

“At the Orange Bowl last year, he (Caldwell) was like, 'What's that teddy bear in your bag?' We told him it was Harold and he said, 'Well, let me see it,' and took a picture with Harold,” Guillermo said.

While Harold’s time with the Clemson football team is coming to an end, he’s seen more of the country than most people – including every stadium the Tigers have played in and several track complexes – but the happiest place on earth is probably is favorite.

“I'm sure he would tell you Disney World. He's been so many places,” Bell said. “He went to Las Vegas. He went to the Grand Canyon, Hoover Dam. He's been to pretty much every college in the country. He's been a lot of places but Disney World is kind of our happy place.”