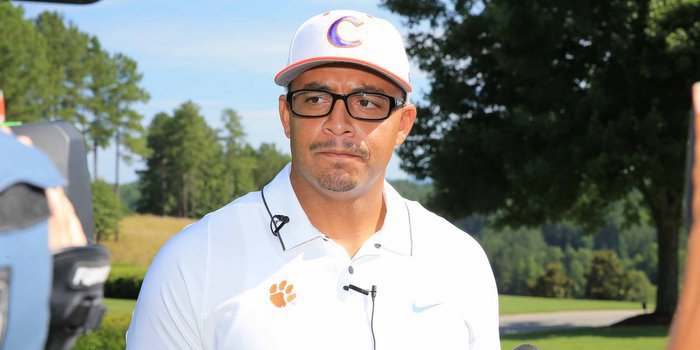 SUNSET, SC – The assistant coaches came fast and furious at The Reserve Tuesday morning, signaling the beginning of college football season for the Clemson media and coaches.

We have plenty of news and notes to pass along, so click back into this story regularly as we update the proceedings.

We’ll start with Deshaun Watson, and even though we did an update it bears repeating that he figures to be stronger, bigger and faster in 2016.

Quarterbacks coach Brandon Streeter met with the media Tuesday morning at Dabo Swinney's media golf outing, and he says that he thinks Watson has added about 16 pounds since the national championship game.

"If you look back at that game, I think he played against Alabama at about 202 pounds," Streeter said. "He comes in the other day, and he's 218 pounds, and that's a good thing. Our goal for him - for starting fall camp - was 215, so he's further along than we wanted. If he can maintain that 215 throughout the season, then that's what we want. I would be very pleased."

Streeter then added that Watson hasn't lost any of his speed. If anything, he's faster.

"His legs are thicker, and he's added good weight," he said. "If you looked at him in the spring, he was faster then than he was at any time last fall. I think he's probably even faster now."

“Because of the numbers in front of him and because we have depth there, it would probably be the easiest thing for him to redshirt,” Streeter. “But he’s so talented, and I remember the first time I saw him throw the ball I was so impressed. He has a lot of talent, and he will have a shot in camp to come in and learn the playbook and prove that he deserves to see playing time.”

*Tony Elliott said he expects Tavien Feaster, Adam Choice and Tyshon Dye to compete for playing time. He said he hopes all of them push Wayne Gallman for the starting spot. He says Feaster has looked good since he arrived on campus and it’s his understanding that Feaster has been cleared to practice without restrictions.

*Robbie Caldwell says Taylor Hearn – expected to be the left guard – has taken snaps at left tackle. However, freshman Tremayne Anchrum has moved into the backup spot behind starter Mitch Hyatt, while freshman Sean Pollard is backing up Jake Fruhmorgen at right tackle.

Caldwell says Noah Green has “changed his body” and weighs about 290 pounds, and ran a 4.9 40-yard dash the other day. He says Fruhmorgen is at 302.

*Brent Venables says sophomore defensive end Richard Yeargin is now up to 260 pounds. He will be counted on to provide snaps at weakside defensive end.

*Defensive tackles coach Dan Brooks says he is unsure if Christian Wilkins will play end or tackle or a combination of both this season.

“They aren’t my players, and they aren’t Coach (Marion) Hobby’s players,” Brooks said. “They are Clemson players. He certainly has the athletic ability to go out and play end, but some of those guys we have out there have looked really good. Clelin Ferrell had a great spring. As a coach, you want five guys who can play tackle and five who can play end.”

*Defensive backs coach Mike Reed said freshman defensive back Trayvon Mullen is up to 185 pounds, at least 10 more than he weighed as a high school senior. Reed says “that’s a good thing” and that Mullen has worked with Clemson’s nutritionists to put on good weight.

Which is pretty good because he was a slender guy,” Reed said. “He has gotten with our nutrition guy and really made strides.”