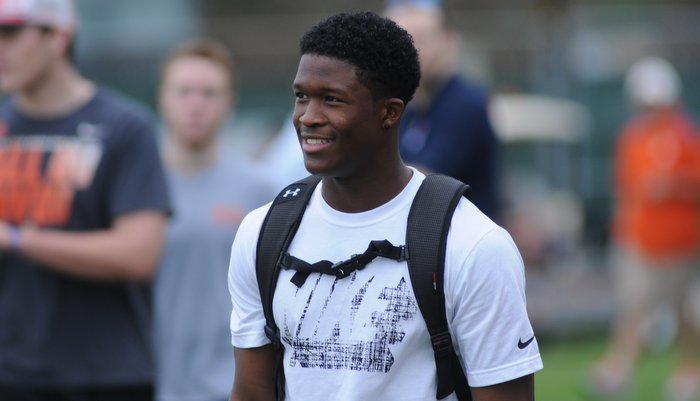 View Full Profile III had a great week at the Under Armour All-American Game and playing in his final game as a high school football player but his eyes are on bigger and better things.

The 5-star Tampa (FL) Sickles athlete and Clemson commit competed in the all star festivities in Tampa last week along with several other Clemson commits and helped his team to a 46-6 victory Friday afternoon.

McCloud told TigerNet that spending the week with standouts from all over the country along with all star coaches allowed him time to have fun while learning more about the game he loves.

"It was a great experience for me from both standpoints - competitive and meeting the people," McCloud told TigerNet after Friday night’s game. "It was fun to learn the schemes. It was fun for me as my last high school game."

"It was great - the atmosphere during the game, the people and the whole week," McCloud said. "The whole week went by fast. Our team looked good from the jump, so it wasn't a surprise to me that the score was the way it was."

The week wasn't just about playing the game, however, as McCloud said he was able to improve his blocking, something that Clemson wide receivers and running backs take a lot of pride in.

McCloud also spent some time getting to know some of the other players from around the country.

"I kind of already knew everybody going into the game," he said. "The person I got to know a little bit better was Shawn Burgess

View Full Profile -Becker the Alabama commit. I also spent some time with Christian Wilkins. I think he's an outstanding player, very hungry and his passion for the game is off the charts."

The 5-9, 176-pound speedster took his only touch in the game - a reverse - 38 yards but said that he didn't really get the chance to showcase his talents.

"Not too much because I show what I am able to do on my film," he said. "It was really just me having fun. I was only able to touch the ball once or twice so it was alright."

What's next for McCloud? Getting to Clemson and showing all of the Tiger fans just exactly what he's capable of.

"Next year, we're going to do big things. We too deep and all that," he said. "I'm ready to get up there so we can do our thing."