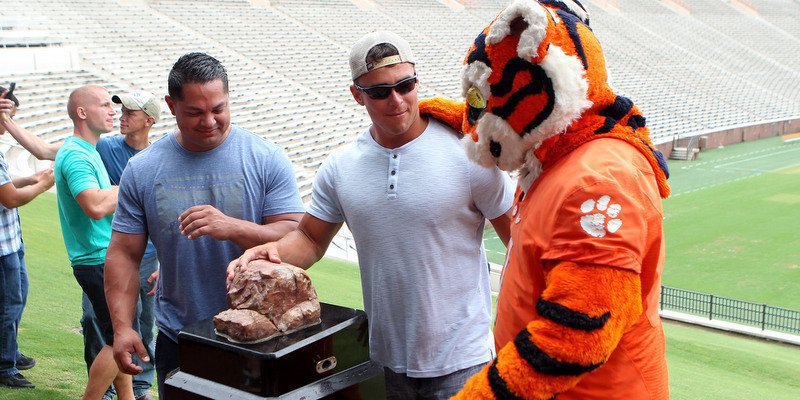 Marines learn about running down the hill

CLEMSON – The Marines invaded Clemson’s Death Valley Thursday, but it was a friendly invasion.

Veterans who are part of the group Honoring Their Service toured Clemson Thursday morning and early afternoon, watching a replay of the bus ride around the stadium before the 2013 home game against Georgia on the big screen in stadium, watching the game-winning drive over Alabama, touring the locker rooms, seeing the National Championship trophy and spending time with Clemson legend Colonel Sandy Edge at the Scroll of Honor.

According to their website, Honoring Their Service gives the local community an opportunity to say thank you, and to show members of our military, and our veterans, that we are people who appreciate what they do on our behalf, day in and day out.

This week is the group’s signature event for combat veterans from the Marine Special Operations Command (MARSOC) and members of the Wounded Warrior Regiment in Greenville SC. The group invites the veterans into their homes in Keowee Key in South Carolina for four days during which they share their amenities and those of the surrounding community.

Other activities include a family getaway program and a Care package for deployed National Guardsmen.

Thursday was a chance for the veterans to see Clemson, and it resonated with local veteran Sam Wigley of Six Mile, who is a Marine veteran, a 2006 Daniel High School graduate and Clemson graduate (December of 2016). Wigley is also an outreach associate for Upstate Warrior Solutions, a veteran non-profit organization that helps veterans find jobs, housing, and healthcare in the tri-county area.

“It’s been a really great week. I’ve seen a lot of guys really happy to be out here participating, and we provided about eight veterans, but the majority came from Camp LeJeune,” Wigley said. “Everybody has had a blast getting to stay with different families and getting to experience the lake and relaxation for a while.”

“I remember the first time they did this, I was in the Marine Corps at the time, and my mom wrote me saying they were doing this event and that there was a huge turnout, which is great,” Wigley said. “But it’s been even better to see the continued support and have people still coming out year after year supporting the veterans. It says a lot about the community and how supportive they are.”

“Hosting these brave men and women is truly an honor. Clemson has such a rich military heritage and bringing these Marines to campus each year is something that we all look forward to," Money said. "While it’s just a small way to say thank you for their service, having them on campus and giving them a behind the scenes tour is a small token of our appreciation.”

Hector Fernandez, originally from Puerto Rico (born and raised), now makes his home in Orlando and is on active duty at Camp LeJeune, was also a part of the events.

“It’s very special, because a lot of Marines don’t get to feel appreciated, and a lot of them don’t know there are people out there that still do care and appreciate us,” Fernandez said. “It’s not the 1970s era where a lot of the military coming back from Vietnam didn’t get any love or appreciation for the things they did. This is a new era, and it’s great for the Marines to kind of see that and know there are communities out there rooting for us.

“Staying with the families and seeing how appreciative they are of us and them going the extra mile they go to make sure we’re welcome is special. And a lot of people don’t realize the logistics and how it takes almost an entire year for the entire community, town and almost state to come together for this. It’s a big thing.”

For Wigley, however, there was an added benefit for a man who grew up in the shadow of Death Valley.

“The family I got to stay with is great, and I just had a blast, he said. “It just made me really look forward to football season.”

Was such a pleasure hosting some of America's bravest on campus today!

We Honor Their Service! ????#Clemson pic.twitter.com/yB5Hrtg1Uk