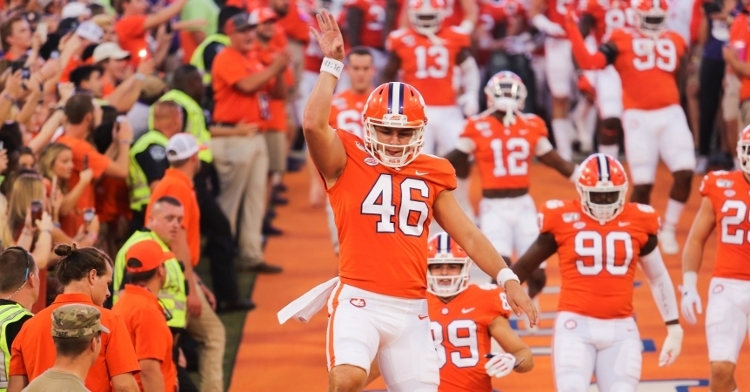 Maddox jumps as he runs down the hill last season. (Photo courtesy of CU Athletics)

Jack Maddox just wanted to take a nap. Head coach Dabo Swinney, who was stalking Maddox as he walked down the hall, had other ideas. Maddox didn’t get his nap, but he did receive a scholarship.

Maddox is a redshirt junior long snapper out of Acton (MA) Acton-Boxborough who enters 2020 having appeared in 11 career games. He snapped in nine games a year ago. Maddox recorded first career fumble recovery on a muffed punt at NC State.

That fumble recovery – and a National Championship – stood as the highlights of his career heading into August.

“Coming down here I knew that (winning a National Championship) was a possibility, but never in my wildest dreams did I think that would come through,” Maddox told TigerNet Friday. “So as a team, that would definitely be number one. But as an individual, as a long snapper, you cherish any opportunity you get to recover a fumble. Luckily, I think it have been the easiest fumble recovery in college football history because it popped right into my lap. I was obviously glad that happened, as well, so I would put that up there in my top memories.”

“During the college search process, I narrowed it down to four schools and Clemson was obviously one of them. I have a unique, cool fact that my uncle is a professor here,” he said. “So, I learned of Clemson and got to come down here, and while I was down visiting I got to come to Coach Swinney's camps. I just had the fluke talent of long snapping and that caught their eye. As I came back for two years, they gave me an opportunity to be a preferred walk-on. So it's a cool story and I'm glad I came to camp.”

One day during camp, Maddox simply wanted to find a cool spot to take a nap and as he walked down the hall in the Reeves Football Complex, he noticed he was being shadowed, maybe even stalked, by a familiar figure.

“I was going to the CASL, the (Clemson) Applied Sports Science Lab, to take an afternoon nap before practice,” Maddox said. “And Coach Swinney was walking behind me and he asked me where I was going and I told him I was going to take a nap. And he kept following, but I didn't make too much of it. And then we got to the room and it was in front of the CASL staff. He asked me if I had paid for school yet, and I said I believe so, and he said I would have little more pocket change because I don't have to worry about it for at least a semester.”

Playing the sport he loves at the highest level was the ultimate reward for Maddox. Earning a scholarship? The proverbial icing on the cake.

"I never came to Clemson to play Divison I football for a scholarship," Maddox said. "I wanted to play because it was a longtime dream of mine and if I had the opportunity to earn one, that would just be the cherry on top. I knew that coming into the season I had a chance to be the guy. Did I expect to be put on scholarship before the season? No. It was obviously a pleasant surprise, but knowing I put the work in over three years, it was definitely a pleasant surprise.”

In an interview provided to the Boston Herald, Swinney said Maddox is as good an athlete who is also a great leader.

“I didn't know much about Jack but he came to our camp. I think he had an uncle that was a professor here so he reached out and said, 'I've got a nephew coming to camp and he's a pretty good long snapper and pretty good athlete.' He really impressed us in our camp,” Swinney said. “And I told him, 'If you can get into Clemson, we'd love to have you on the team. I think you've got some potential as a snapper.' He really had just started doing it so I was intrigued with him as an athlete. I think he played lacrosse and he's a basketball player. He's just a really good athlete. He can run well and and had good size potential. He's really developed nicely like we hoped he would as a snapper.

“He's become a leader. He's a great student and a very, very smart young man. He's the epitome of what you want to see in our program. Guys come in during all different stages of development - mentally, physically, technically, fundamentally - and there's always a lot of work to do. As I always say, there's nothing more common than unsuccessful people. That's a quote from somebody. You've got to pay the price. Jack Maddox is the epitome of that. He had a lot of work to do physically. If you look at where he was when he got here to where he is now, his strength, his size, you name it.

"He had a lot of work to do from a confidence standpoint in trying to become a great long snapper at this level and then the same thing with fundamentals, technique. He had a lot of work to put in that weight room and he's done it. Academically, he's a gifted student and he's excelled. What I love is that as he's put that work in is his confidence and consistency. He's become very confident, very consistent and grown into a great leader for us.”