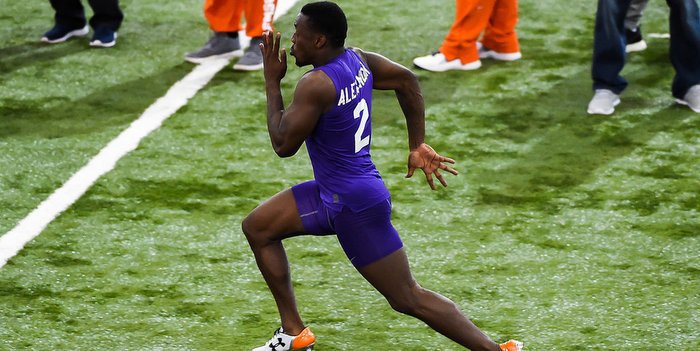 Alexander showed he can catch Thursday

CLEMSON – Mackensie Alexander was made for days like Thursday.

The former Clemson cornerback put on a show for the assembled NFL scouts, coaches and executives at Clemson’s Pro Day inside the indoor practice facility Thursday, but the fact that he excelled shouldn’t surprise anybody.

“For me, I do what I do. This is nothing new to me. I am just happy I am coming out here and competing with my teammates and being able to be healthy and finishing healthy - walking out with no limp and not hurting,” Alexander said after the workout. “Just fighting to get healthy was my biggest concern - not competing because I am going to do that naturally - but being healthy was my biggest concern. Today was good for me - I finished healthy, and I am very happy about that because it means I am healed up. Everything was awesome. I had a good time, I competed, and I feel like teams were really impressed today. That's what I wanted, so it was great.”

Alexander said he was told he ran a 4.40 40-yard dash on his first and a 4.45 on his second run, hopefully easing concerns about his speed.

“You have to be able to check off everything - find out what they don't know and check everything off. My hands were a question, and my speed was a question, and I checked them both off today,” he said. “I ran really well, had good speed, had good hands, and I showcased that today. I thought I looked good in drills, and it was an impressive day. Definitely a big day for me. They definitely left with the smiley faces.”

One reporter asked Alexander if he watches the mock drafts or listens to what the so-called experts say about potential landing spots, and Alexander said no. 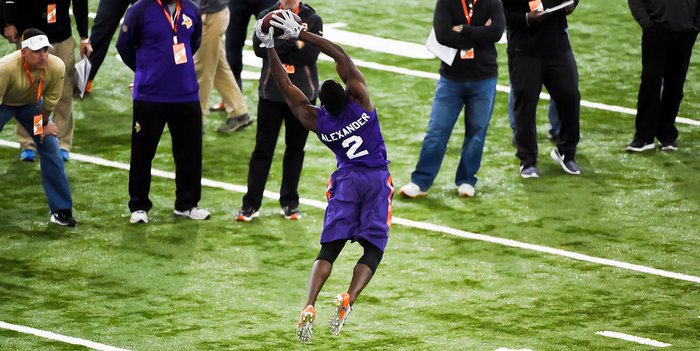 Alexander showed he can catch Thursday "

“None of that means anything to me. I don't pay attention to social media,” he said. “A guy might be first round all the way until draft day and then wind up in the third round. So you really can't focus on that. I just have to focus on what I have to do, and everything else will take care of itself. Like today - I came out and performed and I did a great job, and that's all I can ask for. I came, and I did it, and I did better than they asked for. Until draft day I don't worry about it.”

Alexander was late coming out to meet with the media because he spent extra time conversing with Indianapolis Colts head coach Chuck Pagano, and the extra attention showed by Pagano made an impression.

“It means a lot. He is a guy that is sitting there waiting for you, and that means a lot,” Alexander said. “He knows my community and understands my background and how I do things. It was a blessing just to sit down and talk for a little bit about football and who I am as a person.”

One NFL reporter asked Alexander how he would respond to those who think he’s undersized, and he smiled when he gave his answer.

“Hallelujah. Tyrann Mathieu is undersized, and the guy is a playmaker,” he said. “He is a complete baller. You can see his heart and you can see his soul when he plays. It doesn't matter. I don't listen to all of that. Football is a game of performance and if you perform everybody will shut up. So that's all it is. What separates me from other players is the want to. The will to do things and compete. If you watch me while I am out there, you see that I put my heart and soul into the drills and everything I do. Today was phenomenal.”

All in all, a good day for Alexander, who says he was made for days like Thursday.

“I was made for it. I came out of the womb running,” he said.