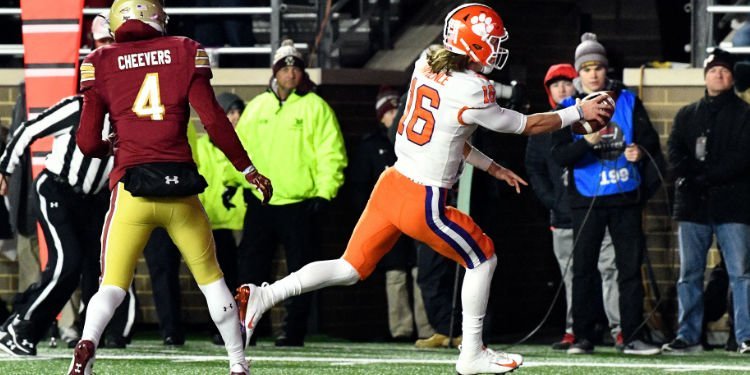 Lawrence scores a TD against BC in the second half. (Photo: Brian Fluharty / USAT)

CHESTNUT HILL, MA – The honors continue to roll in for freshman quarterback Trevor Lawrence, but the award he won Saturday night didn’t quite fit.

Each year the Boston Gridiron Club, the MVP of the winner of the Clemson-Boston College game wins the Leather Helmet Award. The award, named the O’Rourke-McFadden Trophy, was won by Lawrence after he led the Tigers to a 27-7 victory with 295 yards passing and a touchdown through the air.

Lawrence is the second Clemson football freshman to win the award after running back Travis Etienne won the honor last season.

The award was presented to Lawrence by former Clemson running back CJ Spiller, the winner of the first award back in 2008, and even though the leather helmet didn’t quite fit, Lawrence was pleased with the honor.

“It’s really cool. We talked a little about it this week,” Lawrence said. “Travis won it last year and stuff like that. Really it is just cool to win it. I thought we played well, played tough. Obviously, it was cold out there. They had a good team so it was cool for us to play well in a big game. It was awesome. There have been some great players that have worn that helmet. It was just a really cool experience.”

It was the first road night start for the freshman, and he passed the test.

“Not really nervous. Obviously, this is a big game so we were ready,” he said. “I felt like we had a really good week of preparation. Definitely, every week just build more confidence.”

Head coach Dabo Swinney said he was proud of the freshman.

"I'm really proud of Trevor. Really proud of Trevor," Swinney said "He's a true freshman, and to come up here in this environment and really lead us -- you know, he had a few misses and a few mistakes. Obviously didn't get the first down one time. That cost us an opportunity to maybe go get some points. But he's continuing to learn and grow and get better every week."

Lawrence had nine carries on the night, pulling the ball on the read-option when the Eagles would crash on the running back.

“Yeah. They did some good stuff. They gave us some different looks, but yeah I am going to take it when it is there,” he said. “We've got a good scheme. We will keep doing what we are doing and obviously fix some of the things we could do a little better.”

He then said he feels like he is getting better with each passing week.

“Just trying to get better every week. I feel like I am doing that,” he said. “I feel like the team is doing that. We are all just gelling together. O-Line has been playing really well. So obviously I appreciate that. As a team, we are playing well right now.”

Spiller made the trip as a sort of good luck charm for head coach Dabo Swinney – the 2008 game was his first win as a head coach – and Lawrence liked the idea of Spiller making the presentation.

“Yeah, it was really cool. Him getting to come on the trip with us,” Lawrence said. “Just knowing how much he has done for this program. Like Coach Swinney said just the first guy to believe in him and really got this program going, so it was awesome to have him here.”

The Leather Helmet Award has found a new head (and outstanding hair) upon which to rest. pic.twitter.com/ZECi6vDCU2