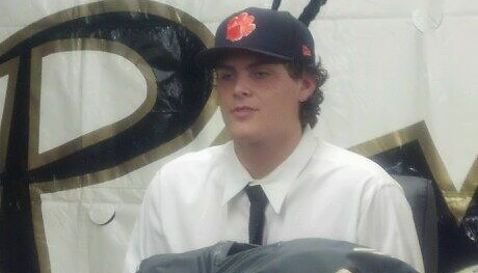 View Full Profile had nearly 30 offers, but Clemson was the only place that he could truly say he fell in love with.

The four-star offensive tackle out of Tampa (FL) Plant could have had his pick of schools like included Alabama (his father's alma mater), Michigan, Georgia, Tennessee, Notre Dame, California, Ohio State and Ole Miss, but in the end he convinced his parents the Clemson was the place he wanted to spend his college years.

“I kept mentioning that ‘I want to go to Clemson, I want to go to Clemson.’ They kind of finally started taking me serious and asked me where I wanted to go after all of the schools that I used to like offered me,” Fruhmorgen told TigerNet Thursday evening. “They tried to get me to look at all of these schools that I could have had a shot at, but ultimately they understood that Clemson is the only place that I fell in love with and felt comfortable with.”

His father – John Fruhmorgen – played on the offensive line in the 1980’s for Alabama and also played a big role in his recruitment.

“It’s been great. It’s been such a long process and he’s been encouraging me throughout it all,” Fruhmorgen said. “He’s helped me out a lot. He’s really happy with my decision to go to Clemson.”

The seventh-ranked offensive lineman in the country and the 124th overall recruit according to ESPN said that it took until last week for him to decide between his finalists – Clemson, Florida and Michigan.

“It was completely made up last Thursday,” Fruhmorgen said. “I was just really comfortable at Clemson and realize that it was it. Every time I was there, I felt like I was walking around at home. When I went to Clemson I didn’t feel like I had to act different there. I just felt like I was at home.”

The 6-5, 280-pound prospect said that he informed the Clemson coaches of his decision shortly before making his announcement at his high school.

“About 30 minutes before I announced,” he said. “They were ecstatic and they were happy that I’m coming. I talked to Coach [Tony] Elliott first and then to Coach [Dabo] Swinney. He was excited and yelling and screaming. It was a fun time.”

Fruhmorgen will make a return trip to Clemson this weekend for the annual Orange and White game where he wants to see the Clemson faithful in action.

“It’s just an opportunity for me to see the fan base and get a feel for the game day atmosphere,” he said. “I know that the spring game won’t be quite the same, but I just want to see what a normal game day is like in Death Valley. I want to see the fans cheering for the team and what that’s all about.”

Clemson adds Fruhmorgen to a 2015 offensive line recruiting class that already includes the nation's No. 1 tackle prospect in Mitch Hyatt

View Full Profile , who recently earned the distinction of becoming the first offensive lineman invited to Nike's 'The Opening.' Rivals ranks Green as the nation's No. 36 offensive tackle.