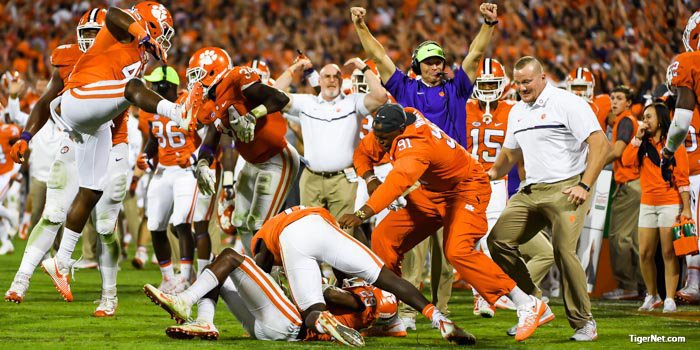 The Tigers make a late stop against Louisville last season

CHARLOTTE, NC – The Louisville Cardinals are about to embark on their fourth season in the ACC, and the football program has enjoyed plenty of on the field success. They’ve won 17 conference games in three seasons, defeated Florida St. in dominating fashion in Louisville last season and watched proudly as quarterback Lamar Jackson hoisted the Heisman Trophy last December.

What they haven’t done is beat Clemson. All three games have been close, and in all three games, Clemson has found a way to win.

At Thursday’s ACC Kickoff in Charlotte, Jackson, and defensive back Jaire Alexander both tried to initially downplay the importance of the Clemson game to the media, but their true feelings eventually came through, and it’s evident that the losses to Clemson are a sore point within the program. It’s also evident the proverbial target will be squarely on the back of the Tigers when Clemson visits Louisville in September.

“I'm very excited. We played there and it was very loud and the fans were all into the game. It's our turn now,” Jackson said of the game against Clemson. “We wonder what happened (last season). We just started losing. We have to transition into this year and turn it into motivation.”

Alexander said the Cardinals know exactly where Clemson falls on the schedule.

“I like to think it's in the back of my mind but we like to take it one game at a time,” Alexander said. “I know a lot of my teammates have a chip on their shoulder about the Clemson game.”

Jackson said this time around, the Cardinals have to play 60 minutes.

“Just the atmosphere and the environment, the fans, the preparation into the game,” Alexander said. “It's always a hard week of practice. You know what's at stake so you're going even harder because you know the game is going to be hard and a tough-fought game.”

“There will be two things I remember about that game. For one, I couldn't see out of one of my eyes because I had allergies or something so I couldn't see,” he said. “And then, as I was walking off the field some fan runs up and starts dabbing in my face. I remember that and I remember his face. That was overboard. We just lost and I don't want to see that.”

Head coach Bobby Petrino said Louisville knows they can play with Clemson, but they know they have to beat both Clemson and Florida St. in the same season if they want to win an ACC Atlantic Division title.

“We feel like we play right with them,” Petrino said. “We have to go out and earn it and beat them both in the same year and prove it. It is our job to prove it.”