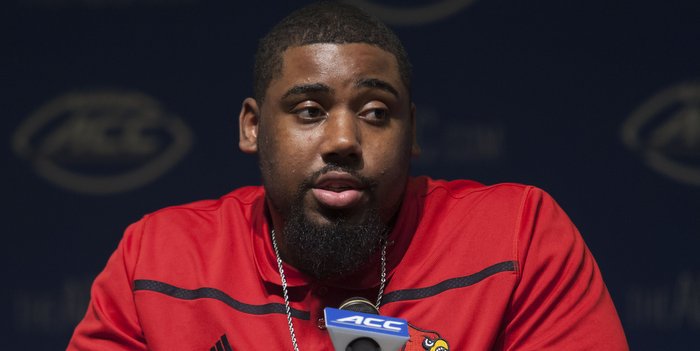 Louisville defensive end Sheldon Rankins has some advice for Clemson fans and players who make the trek to Kentucky for Thursday night’s primetime matchup between the 0-2 Cardinals and the 2-0 and ninth-ranked Tigers: Expect it to be crazy.

Rankins grew up just two hours from Clemson’s campus and was recruited by the Tigers, making the Clemson game extra special for the 6-2, 303-pound senior.

The 2014 season was Louisville’s first in the Atlantic Coast Conference, and the Cardinals visited Death Valley for the first time. Clemson held on to win a 23-17 defensive struggle despite losing Deshaun Watson

Deshaun Watson
So. Quarterback
#4 6-2, 207
Gainesville, GA
View Full Profile on the sixth play of the game with a broken bone in his hand.

The Tigers’ offense was stagnant for most of the contest, but a punt return by Adam Humphries

Ammon Lakip
RS Sr. Punter / Kicker
#36 5-11, 200
Alpharetta, GA
View Full Profile were just enough points in the win. The Cardinals gave the Tigers a scare after getting inside the five-yard line on a 73-yard pass to James Quick late in the fourth quarter. However, Clemson’s defense shut down Will Gardner on four consecutive plays, including DeShawn Williams

“That was an emotional loss. Guys were torn up about that one,” Rankins told TigerNet in July at the ACC Kickoff. “To dominate the game defensively as we did - I think at one point we had several straight three-and-outs against their offense. To dominate like we did and come up that short really hurt the guys.”

The Cardinals lost a heartbreaker Saturday. Louisville and Houston were knotted tied 17-17 heading into the fourth quarter, but it was the Cougars special teams that made the difference in the final stanza.

Kyle Bullard hit a field goal to begin the fourth quarter and Brandon Wilson returned a kickoff 100 yards to give Houston the lead before the Cougars’ last stand – blocking a 53-yard Louisville field goal attempt with less than a minute to play. Houston forced four turnovers – including two interceptions – and outgained Louisville 462 to 395 in the contest.

Thursday night’s game kicks off at 7:30 p.m., and Louisville has an 81-28 overall record in their 18th season in Papa John’s Cardinal Stadium, and Rankins said he is looking forward to getting the Tigers on his home turf.

“I think them coming in and having the game at our stadium and getting a taste of what our crowd atmosphere is like, I think that will be fun,” he said. “We will be in front of our home crowd, and I think it will be crazy. I know Clemson will travel well, and I know we will pack the stadium out as much as we can.”

The Cardinals hosted a high-profile Thursday night game last season, hosting defending national champion Florida St. in late October. The Cardinals rode the emotion of the Papa John’s crowd and jumped out to a 21-0 lead, but Jameis Winston threw three touchdowns to offset a three-interception start, and Dalvin Cook had two long scoring runs to help second-ranked Florida State rally for a 42-31 victory.

Rankins said the Cardinals learned a lesson in that game.

“Obviously, the big thing is not to give up the lead. You have to finish,” he said. “We got up, and some guys took their foot off the gas. With great teams, if you give them a little life, they are going to take it and run with, and that's what they did. They took it and ran with it and came out on top.”

Rankins said that Louisville looks at both Florida St. and Clemson as natural football rivals, but he likes the idea of Clemson and Louisville taking it to another level.

“I can see us being a rival with both of them. Obviously, I would take Clemson because I grew up closer to Clemson, and I have more of a connection to Clemson,” he said. “But both of them are great programs. It was crazy. Clemson recruited me and I was in that stadium for a spring game when I was in high school. Being back in that stadium and playing was unique. I loved it.”

So what can Clemson expect on a wild Thursday night in Louisville?

They can expect some drunk, crazy fans. It's going to happen,” he said. “Fans will be talking trash and it will be loud. When third down comes, it's gonna be loud. Just like it was at Clemson, I expect equal noise.”