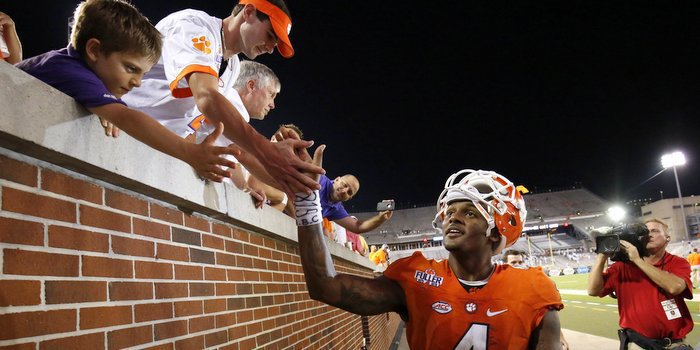 Watson needs to be more of a threat in the running game (Photo by Jason Getz, USA Today)

The craziest week in Clemson since last season’s home game against Notre Dame is about to begin.

Louisville knocked off Marshall late Saturday, and two top five teams with identical 4-0 records will face off Saturday night in Death Valley. The last time two top teams squared off in Death Valley, No. 5 Florida St. blasted No. 3 Clemson 51-14 in 2013.

How Clemson handles the intensity and the hype leading into the game against dynamic quarterback Lamar Jackson will go a long way towards determining the end result, but before we get into talking about Louisville we’ll take a final look at the 26-7 win over Georgia Tech.

Let’s start with the crowd. Georgia Tech has changed its policy and doesn’t allow the media to access the field prior to the game, but it didn’t seem to matter. The Jackets had called for a Whiteout, but even a few minutes before kickoff there was more orange and more Clemson fans in the seats than there were Tech fans.

The crowd never really got into the game, especially after Clemson drove down the field on the game’s first possession and stuck it in the endzone. The Jackets failed to move the ball in their first couple of series and it was almost as if the crowd sensed that Tech would never mount a serious threat.

Brent Venables’ defense played well on all three levels, but it was the effort of the defensive line that was the difference. And that line will have to be just as good against Louisville this week- I’ve watched Louisville have success in the read option game, and opponents are failing to set the edge or are getting too far up the field and letting Jackson make plays with his legs. It will be interesting to see if Clemson can keep Jackson in the pocket and make plays with his arm.

Speaking of the zone read – something just seems off with Clemson’s zone read game and the rushing game overall. The offensive line has been underwhelming and that’s been a big part of Clemson’s struggles in the running game. Running back Wayne Gallman has also been doing more dancing at the line of scrimmage than I’ve seen in the past, and there were times I wondered if we would see Tavien Feaster or more of Adam Choice. Choice had a few carries and Feaster never materialized, even though I thought the threat of a run-game home run might loosen up the defense.

Through four games, Clemson ranks 80th nationally in rushing offense with 159 yards a game and 4.17 yards per carry. That’s a far cry from the successful running game we saw last season.

But quarterback Deshaun Watson threw the ball 30 times in the first half Thursday night, and we asked the coaches about that after the game and they said Tech was concentrating on stopping the run and the outside throws were open.

Tech was making Watson – and the receivers – be perfect all the way down the field. It didn’t work in the first half but it did in the second half as the Tigers managed a measly three points. So what does all of that have to do with the read option? When Clemson’s offense is at its best – and Watson is at his best – Watson is a threat in the run game. I’m not sure if the coaches are saving him for the latter part of the season or if they feel the offensive line isn’t playing well enough, but last year they stayed with the running game longer in games, even if there weren’t a lot of holes.

Against Louisville and an active defensive front, the Tigers won’t win by throwing out routes. Watson will have to run the ball, and he’ll have to be accurate on his deep throws. Neither one has really happened this season.

The emergence of Ray-Ray McCloud has been a pleasure to see, but what’s happened with Deon Cain? He’s had a few drops – including one that would have been a touchdown Thursday – and he hasn’t been targeted as much as I would have thought. The emergence of Cain would make the offense more dangerous.

One good thing we saw in the passing game Thursday was Jordan Leggett. The Tigers’ targeted Leggett early and it opened up the middle of the field. He caught a touchdown pass late in the first half, and he’ll need to be a red zone target for Watson next Saturday.

Now for the offensive line: We saw true freshmen Sean Pollard and Tremayne Anchrum get snaps at Tech last week, and I can’t imagine that’s the kind of scenario the coaches envisioned when raving about the offensive line in fall camp. Even Justin Falcinelli and Maverick Morris earned playing time as the coaches searched for any combination that would work.

So what’s the problem? I don’t know and I don’t have the answers. Mitch Hyatt hasn’t played well, and Taylor Hearn has had his whiff moments at left guard. There have also been issues at right guard and right tackle. Will we see a shakeup in the rotation this week? I doubt it, but right now there are still more questions than answers.

Now, I’ve spent a good portion of this pointing out the warts, but this team is also 4-0 with two wins on the road in places they’ve had a hard time winning in the past. That’s good that you can complain about a team that is ranked in the top five. But I’ve also seen Tech and Auburn in person, and both of those teams are just average. If Clemson wants to be 5-0 this time next week, things will have to change offensively as they take a major step up in competition next week.

If Watson has 10 or more designed runs and can be a part of the running game, I think the Tigers will knock off Louisville. If he’s a no-show in the running game and the Cardinals force Clemson to win through the air and run in between the tackles, I think Louisville will win.

Either way, this is going to be a fun week.