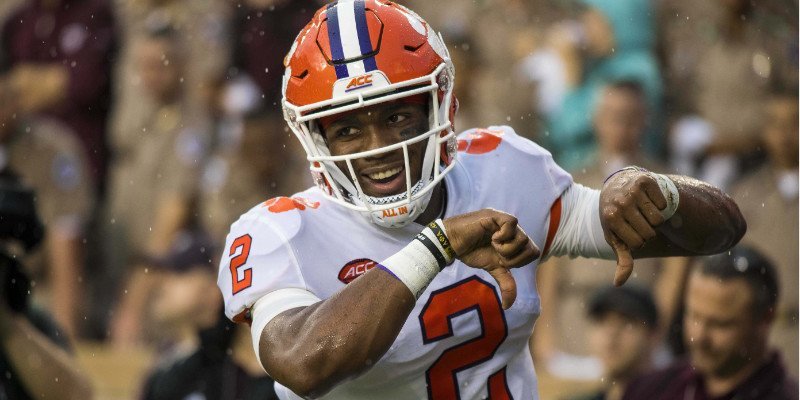 Kelly Bryant did enough to propel Clemson to the win (Photo by Jerome Miron, USAT)

Bryant played his way onto the field on the practice and game fields going into No. 2 Clemson’s trip to Texas A&M Saturday, but a key mishandled snap to close the first half threw his grip on the No. 1 QB role in question.

Freshman former five-star prospect Trevor Lawrence came out for the final play of the second quarter shortly afterward and then two series to start the second half that ended in punts. Scott said that flow of the game dictated Lawrence playing in those situations and that it wasn’t the plan going in.

With Lawrence not capitalizing on that opportunity, the senior returning starter then found the gear that guided him last season in dominating road wins at Louisville, Virginia Tech and South Carolina - and a close battle at NC State.

“I felt like Kelly settled down a little bit there in the second half,” Scott said of Bryant. “His experience is really why we went with him in that situation in the second half...I thought (Lawrence) was ready when his number was called. But there's just something about Kelly. His experience, his moxie - those are the situations right there where one mistake can cost you a ballgame in this type of environment and I thought he handled things well in the second half.”

Bryant led back-to-back scoring drives - one answering the first of three second-half TD passes from his opposite number in Kellen Mond - to put Clemson out-front just enough to keep the Aggies at bay while grinding out the final minutes. Bryant connected on 7-of-9 second half throws for 124 yards with a touchdown pass in the final 30 minutes.

“He had one series - it was the fourth-and-one. That series was probably his worst series,” Clemson coach Dabo Swinney said. “Just disappointing...But after that, I really thought he really kinda settled in. And he played well. He made some really big-time throws. Huge runs and took care of the ball, managed the game. That's what we needed him to do in some critical situations. He showed a lot of poise and that was good to see.

“And I thought Trevor did a good job. This kid's a true freshman. He walks right out there like it ain't nothing...There's no doubt that Kelly down the stretch in the fourth quarter really settled in and gave us the experience that we needed in that moment to get out of here with a win.”

Bryant, who improved to 14-2 as a starter Saturday, says he has found a rhythm on and off the field during this QB competition.

“I’m just locked-in. I’m not letting anything get to me,” Bryant said. “Staying poised. Just keep playing and trying to be that leader even when I’m not in the game. On the sidelines talking to my guys and being encouraging. Just making plays when it’s there. Just doing my job and that’s what I’ve been doing all year.”

Both Swinney and Scott agreed that playing Bryant and Lawrence will continue as long as both perform.

“You just got to love what you see out of Kelly,” Swinney said. “He's just locked-in on what he's doing and trying to play well with his opportunity. I think both of those guys can help our football team. Again, if something really changes and separates where we have way more confidence in one way - you could see an adjustment somewhere down the road.

“Honestly I hope they both play well with their opportunity - I don't see a situation where they can't continue to play as we go.”