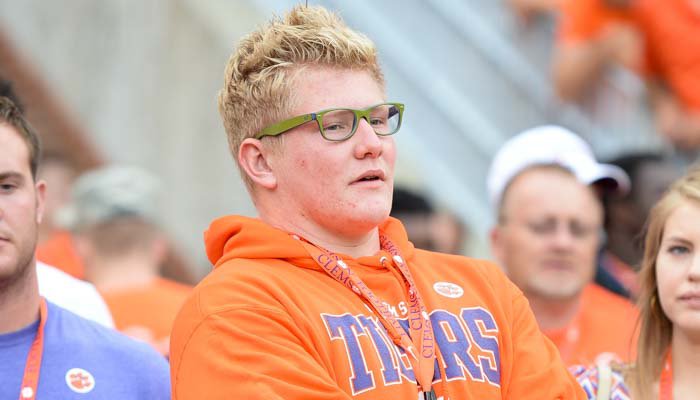 Boudreaux said the Tigers have him as one of their top OL targets.

View Full Profile has over 50 offers and is one of the most sought- after offensive linemen in the 2016 class. After Saturday's visit, the Orlando (FL) Bishop Moore prospect is very high on the Clemson Tigers.

The 6-4, 278-pound tackle spent two days in Clemson over the weekend and came away impressed with everything from the coaching staff to the tacilities and the game day atmosphere.

"We got there Friday and we met all of the coaches and toured the campus and all of the facilities," Boudreaux told TigerNet. "We went in the o-line meeting and I got to see all of the o-linemen and Coach Caldwell. After the walk through, they took us on the golf cart for about 45 minutes around the indoor practice facility and where the new facility is supposed to be. It was a great experience Friday.

“Saturday, I met all of the recruits. They were just showing me so much love. I got to talk to Coach Swinney before the game with his wife and my dad. He was the most genuine guy that I've ever talked to. He's a really cool guy. We got a chance to watch the game and it was just an unbelievable experience. The family atmosphere around the program is just awesome. It felt like home."

The three-star prospect said that he didn't realize just how exciting Clemson entrance of running down the hill was until he saw it in person.

"That was crazy," Boudreaux said. "I didn't know that it was that big of a deal. It is definitely the most exciting entrance in college football."

"They were really cool. I got to a chance to talk to all of the offensive line recruits that were there. I got to hang out with Sean Pollard," he said. "They are all great people."

After the visit, Boudreaux said that Clemson is very high on his list but he won't begin to narrow the list - which contains schools like Arkansas, Boston College, Louisville, Mississippi, Mississippi St., Notre Dame, Oklahoma St., and Penn St. - until after his high school season ends.

"They are one of my top schools right now but I haven't narrowed down my list or anything yet," he said. "I haven't ranked any of my offers because I've just been so busy with my season. Definitely after the season, I'll start narrowing down all of my offers. My dad saw the board and I was the top recruit for 2016 and right beside me was Sean Pollard. That's pretty cool that I'm so high up on their list."

Boudreaux said the plays with a certain aggressiveness and always finishes plays, which is why Caldwell believes he play both guard and tackle.

"I'm really aggressive. I definitely finish plays until the whistle blows," he said. "I have pretty good technique. Coach Caldwell said that because of my athleticism and the way I can move, he said that I could play either tackle or guard. It doesn't really matter to me."