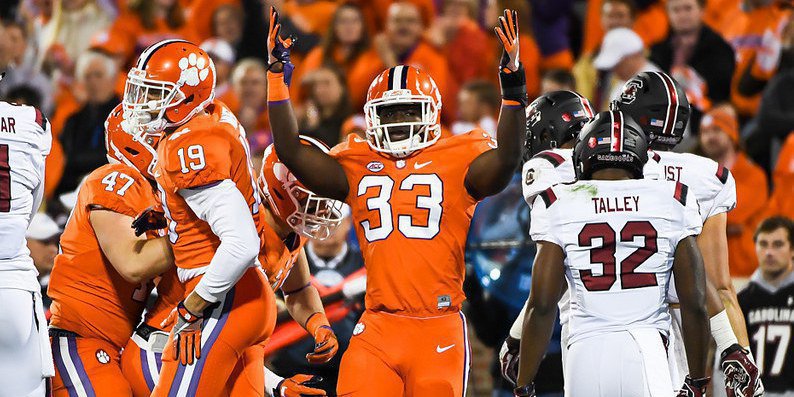 CLEMSON – The leading tackler on the Clemson defense last week at Virginia has a last name familiar to Clemson fans, and the way J.D. Davis threw his body around the field with reckless abandon was reminiscent of the way Jeff Davis played.

Like father, like son. Athletic ability and football savvy, but also great citizens off the field. It’s the Davis way, and head coach Dabo Swinney earlier this week defended his decision to give J.D. and his brother Judah scholarships, saying that the twins didn’t deserve the comments made about them over the past few years.

“Isn't that awful some of the comments that young people have to put up with because of ignorance, people's own agendas. It's sad, it really is and those people know who they are. Just judgmental,” Swinney said. “That's the world we live in. I've watched these guys grow up. They were my neighbors. I watched them grow up and sometimes you see things other people don't see. We don't have two better winners on this team than J.D. and Judah Davis and they earned their opportunity here. They gray-shirted. Had those two guys been on the normal track, they would've been highly recruited as seniors because they were developing guys and I saw that.

“I love Jeff Davis but I like my job better, but at the same time I wanted them here because I thought they would develop. When you're putting a team and a roster together, you're not just going to get Sammy Watkins. Everybody's not Sammy Watkins - open the box, no assembly required, bam, an unbelievable player. That's not the case. Because of recruiting and all of the intensity of all of that, everybody has to be this unbelievable player as a freshman, or it's, 'What's wrong? Why isn't he playing?' Maybe there are just better players in front of him right now or he's just not quite ready.”

“I believe in Coach Swinney's vision and I thought that if I came to Clemson I would have a great shot at winning a National Championship and I'm blessed that I've been able to have done that,” Davis said. “That was the biggest decision on why I came here - to play where my dad did. I love watching him. I've grown up watching him and being here in Clemson and there's nothing like it.”

Jeff Davis has been instrumental in the PAW Journey display in the new football operations center, founded the Call Me MISTER program and acts as a mentor to Clemson’s current players. J.D. says he is prouder of his father off the field than he is for the on-field accomplishments.

“I am so proud of him. Every time I walk through the doors and I see the PAW Journey, I think about my dad and what he’s meant to a lot of people,” Davis said. “Him being 5 minutes away is big time. He's so wise. Anytime I can soak up some information, I'm always asking. He's just dad to me. People are always saying that my dad is a legend is pretty cool. Not for me, it really hasn't been about football. My dad's number one thing is me becoming a great man and I know I could do that at Clemson and football is just a bonus. No negatives. I knew I could make a name for myself, even with everything that he's done.”

Davis said he has used the negative comments to fuel his competitive fire.

“No matter what, people are going to think what they want to think. My dad has been very supportive. He said, ‘Hey, you want to play football, you don't want to play halfway, you want to play full speed and give it all you got, but at the end of the day you can live with whatever the success or failures that you have if you put everything you have into it.’ But whenever people get negative, I just use it as motivation.”

Davis said he loves playing with his brother, and there are a few moments that stand out.

“Our senior year, we were playing Easley and they are our huge rival, and I had a pick-six and he had two forced fumbles and three sacks and it was just great being able to play well together,” he said. “Just being able to play together are my greatest moments with him. There was one time where we switched classes on April Fool's Day, but other than that we were pretty good. They didn't know and we got away with it, but we ended up telling them at the end of the day.”

However, being at Clemson is all about family, and Davis wants to make that family proud, especially those that showed faith in him.