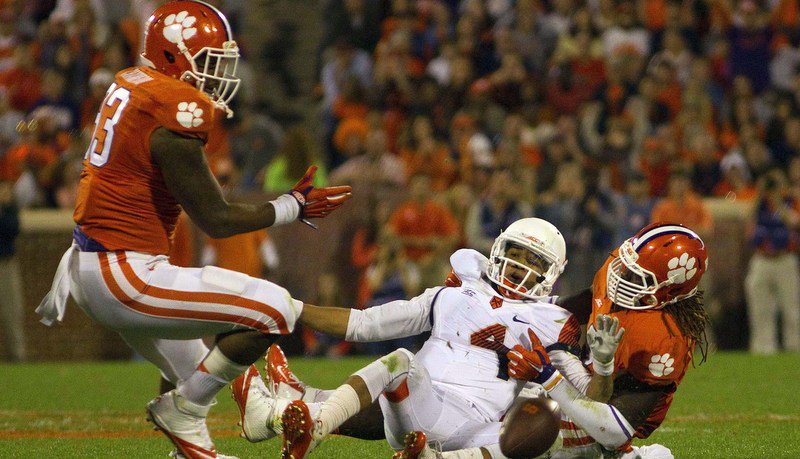 Tavaris Barnes will play his final collegiate game next Monday

Tavaris Barnes
RS Sr. Defensive End
#9 6-4, 273
Jacksonville, FL
View Full Profile left Jacksonville for Clemson University, he was a young man facing one of many life’s challenges – get an education and better his life or follow the wrong crowd of people that would probably prove detrimental.

Five years later, the Florida native will return to his home state for his final football game as a Clemson Tiger – the Russell Athletic Bowl against the Oklahoma Sooners – and is just one semester shy of earning his college degree in Parks, Recreation and Tourism Management.

Barnes told TigerNet after Monday’s bowl practice at Citrus Bowl Stadium that there were many points during his career where, he could have given up but instead he chose to rise above his circumstances to better his life and prepare a future for his wife and daughter.

“It's crazy. It's a blessing,” Barnes told TigerNet. “Coach Swinney texted me the other day and he still has a picture I sent him when I cut my hair two years ago. He could've kicked me out of here. I just feel like it's a blessing. I'm humbled by it all and I'm just taking it all in and enjoying this last ride with the seniors and the team.”

Barnes faced a lot of adversity on the gridiron and in his personal life – including losing his son just days after birth – but he said that being a part of the Clemson football program taught him how to live his life the right way both on and off the field.

“Definitely. I'm way more mature and way smarter,” Barnes said. “I learned not to put myself in bad situations. I learned how to not hang with the wrong crowd and stuff like that. He [Swinney] has taught that in this program. I feel like Clemson is coming like Stephone Anthony

Stephone Anthony
Sr. Linebacker
#42 6-2, 244
Polkton, NC
View Full Profile said. It's going to be one of the premier college football programs in the next few years.”

However, each bump in the road was a lesson that Barnes could learn from preparing him for a future in the NFL or away from football.

As Barnes prepares to put on the Clemson uniform one last time, he had one piece of advice for the younger Clemson players and those considering becoming a Tiger.

“Just take the coaching. It's going to be a long journey, but just stay the course,” he said. “It wasn't easy but you're going to be fine.”