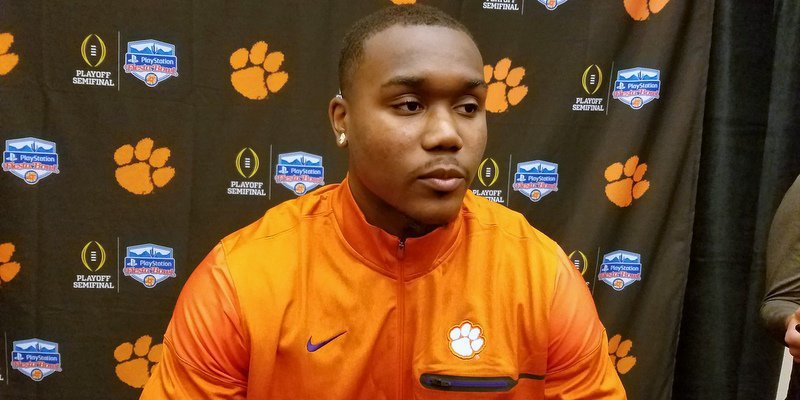 Johnson talks to the media Tuesday

SCOTTSDALE, AZ – Clemson enters the College Football Playoff Fiesta Bowl as one of the youngest teams in the nation, but the leaders of the team are a grizzled group of veterans that have seen and done it all when it comes to college football, leaving a legacy for the younger players to follow.

One of those leaders is senior safety Jadar Johnson, who admitted Tuesday that he didn’t know if would make it this far. Several times, Johnson said, he wanted to pack his bags and head for his home in Orangeburg, perhaps even transfer to South Carolina State.

But he stuck with the Tigers, laughing and saying he isn’t totally sure head coach Dabo Swinney would have let him transfer, and now he’s earning the rewards as his team makes a second consecutive trip to the college football playoff.

A lot of that success is because of the leadership of the senior class.

“Really, as a class, we just wanted to be known as guys who are great leaders and that's our main goal - just to lead because Clemson is going to keep playing when we leave,” Johnson said. “It's not going to stop. Being a good leader and instilling the coaching in our younger guys, that's something that we worked hard on because we don't want to just do good for a couple of years and then fall back down the ladder. We want to keep continually rising, continually increasing how good we are on and on and on for years to come. Just being great leaders and instilling the things that Coach Swinney instilled in us into the younger guys.”

Many of the seniors have been around the program for five years, and Johnson said that kind of longevity breeds chemistry.

“It helps because it's all about communication on and off the field. On the field, if you have a good friendship with the guys that you're out there with and good chemistry, it's easy to communicate and easy to keep that vibe out on the field where everybody is locked in, and everybody knows what's going on. Even off the field, it helps to keep guys out of trouble,” he said. “If you know there's a player on your team that you know likes to go out a lot, it's good to have that chemistry with them that you can go to them and be like, 'You don't need to go out tonight. Just focus. We're right where we need to be.'

"Just to keep guys focused and the mutual respect that we have for each other is big for everybody. I respect Ben (Boulware) and Ben respects me, so it's easy for me to say something to him and easy for him to say something to me. That's with all of the guys on the team. I feel like that's one of the most important things to being a good team, you've got to have that chemistry.”

Many of those seniors, however, have had success for more than one season while Johnson is starting for the first time in his career. Persevering through the tough times and sticking with the program despite a lack of playing time has earned his teammates’ respect.

“It helped because I already had a voice out there. People respected what I was saying even when I wasn't a starter, so coming in and actually starting and having more power to my voice, it was definitely big. I feel like a lot of my leadership and the respect that the guys have for me just came from off the field because I wasn't even playing that much and guys were respecting what I was saying,” Johnson said. “That's because I've stayed so focused off the field and even when guys needed me I was there just to give them that word of encouragement because it's not all about yourself. It's all about the team. So say if Jayron (Kearse) is in front of me and if he was having a bad day at practice, I'm in his ear telling him, 'Come on man, you know you can do it. Just settle down and focus. I know you don't want to be here but talk to yourself. You've got to be here. Go ahead and do your thing'

"That's the type of guy I was and that just gave me a level of respect to the other guys like, 'Man, he's not worrying about himself. He's a team guy.' When you have that character like that, it's easy for guys just to respect you as a person.”

Once this group moves on, Johnson believes the groundwork laid by his class will enable the Tigers to continue to perform at a high level.

“Definitely. They've been doing a good job of recruiting guys. The young guys that are coming, they are so athletic, and they're so ahead of time,” he said. “When I came in here, I didn't know anything. I was just raw, but the guys that are coming in, especially on defense, they already know defenses. The offensive guys are coming in ready to play right away. It's a struggle for the coaches to pick and choose who they have to redshirt. We have great athletes and great players coming in with the recruiting, so I feel like we have the caliber of players to keep winning for years and years to come.”