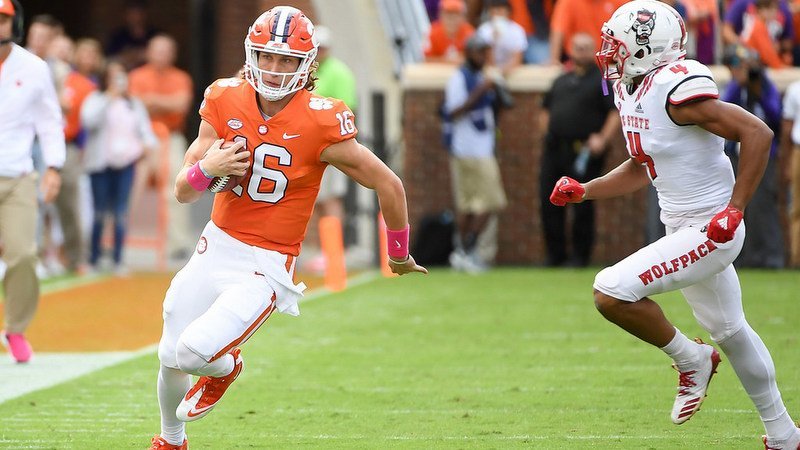 Trevor Lawrence looks for running room against the Pack

The Clemson football team spent two weeks listening to the national media and hearing the sound bites coming out of Raleigh, about how NC State could challenge the Tigers for supremacy in the ACC Atlantic Division.

It was two weeks too long, and quarterback Trevor Lawrence said the Tigers – and the offense in particular – wanted to make a statement.

“We just didn’t want to leave any doubt that the game should’ve gone a certain way,” Lawrence said. “It was clear how we won the game by a good bit.”

Lawrence passed for a career-best 308 yards including a 46-yard TD throw to Tee Higgins in his third college start. He directed three first-half drives of 50-plus yards as the Tigers took a 24-0 lead at the half.

“We really wanted to set the tempo and help our defense out by getting a touchdown on the opening drive,” co-offensive coordinator Jeff Scott said. “I was really pleased by that. It was nice to have a good kickoff return, and that put us in position. We improved on 3rd down this week, and that was a big emphasis for us this week at practice. We have been throwing the ball and catching it really well and it was great to get that opportunity during a game today.”

Scott said Lawrence took advantage of the Pack crowding the line of scrimmage in an effort to take away the Clemson run game.

"Offensively you want to take what they give you. At least 10 of those pass calls were actually run calls that had a tag with it, an RPO,” Scott said. “They had extra guys around the box and they are going to make a freshman quarterback and receiver be able to make the throws and catches. It reminded me of 2015 when we played Boston College and threw it for 420 and rushed for 416 the next week at Miami. To be able to go back to last game when we rushed it for four hundred and seventy something and then the very next game being able to throw it for 380 is what you want to be offensively. Defenses are going to play you different ways. Really proud of our guys today, great start to the second half of the season.”

Scott said the Pack dared Lawrence to beat them through the air.

“Yeah and we knew going into the game that’s what they were going to do that, they’ve had a ton of success with it,” he said. “I can watch a video two years ago with Deshaun Watson, Mike Williams and Artavis Scott and they are pressing the throws. We knew we were going to get challenged, but we had a lot of confidence going into the game. We actually missed a couple throws as well that really could’ve gotten us a couple more scores. This put defenses in conflict with what they want to do to try and stop us.”

Now that Lawrence is the unquestioned starter, the offense is starting to hit its stride.

“Now that Trevor is our guy, we kind of know now who we are offensively. What we are going to be and the timing is important,” Scott said. “Now he is getting reps with all the first team guys and timing has been the biggest improvement for him. Execution comes from practice. Coach Streeter, Elliott and I knew we had been throwing and catching really well in practice. We just wanted that to carry over and it did today.”