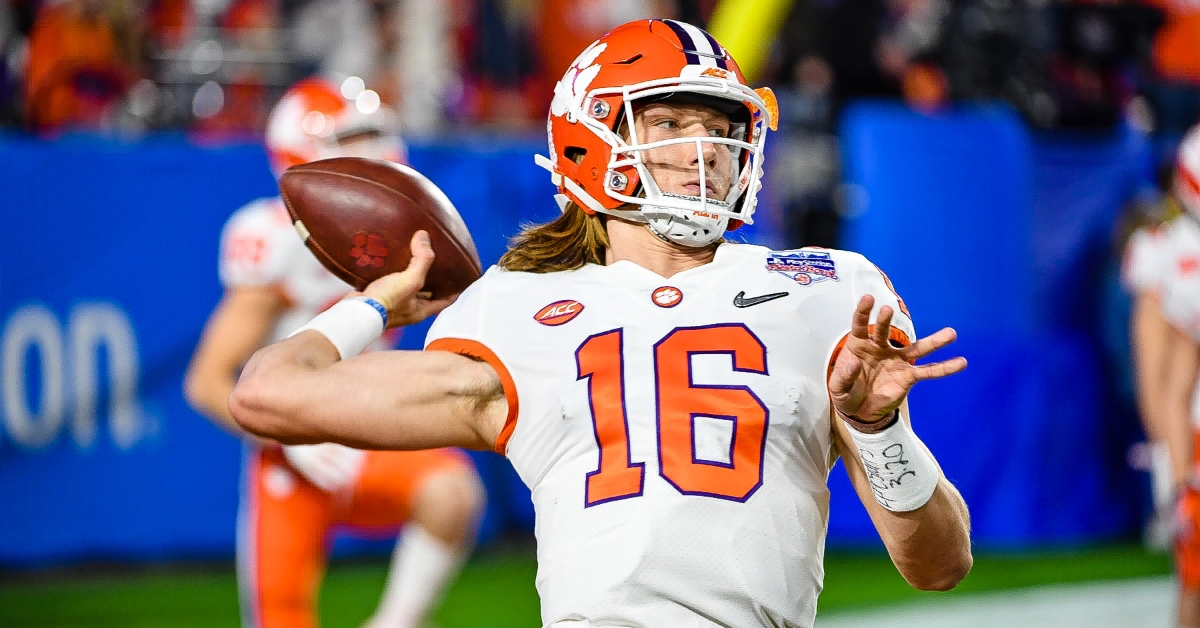 GLENDALE, AZ – While many Clemson fans had their hearts pounding and their blood pressure rising in the final minutes of the Fiesta Bowl, Dabo Swinney and Trevor Lawrence were calm and having fun on the sideline of State Farm Stadium.

Trailing 23-21, Clemson took over with a little over three minutes to play and Lawrence engineered a four-play, 94-yard drive that took just 78 seconds off the clock that will go down in history that gave Clemson a 29-23 lead that it wouldn’t relinquish.

But it was his poise in the moments before taking the field that stand out even more giving Swinney all the confidence in his signal-caller.

“Well, I just said, ‘Let's go win it, man.’ Trevor [Lawrence] kind of took over the huddle, to be quite honest with you,” Swinney said of the moments before the final drive. “He called the guys up, and he just said, ‘Hey, man, I love all of you guys. Let's go win this thing.’ It was just a real poise. There was never one second that I did not think we were not going to win the game. That's an honest answer. Trevor and I talked about it on the sideline, ‘Man, is this fun or what? I'm not really sure how we're going to win this thing, but we're going to win the game and it is going to be an epic thing.’”

Swinney put his best players on the field and told them to go win the game.

“Listen, they went right down -- they made plays,” Swinney said. “That's a well-coached team, and that team has a lot of heart and character as well. You saw that in them tonight. But we just talked about, let's settle in. We were ten personnel and put our best athletes on the field. This is what we do. We're four-down territory the whole way. We've got plenty of time. left, so let's go win the game. He [Trevor Lawrence] had a nice quarterback draw. We hit Amari [Rodgers].

“Amari kind of had been quiet and hadn't had much opportunity. I told Amari, ‘You're going to get a big play somewhere. Just stay focused, stay ready.’ It was a huge play by Amari. Just again, I think we came right out, hit a slant maybe to [Justyn] Ross, just to kind of get us some rhythm. When you're putting drives together at the end of the game like that, and getting in a rhythm early, getting that first down is critical. We were able to do that, and then just made big plays.”

The scoring play to running back Travis Etienne was one the Tigers had practiced in the weeks leading up to the Fiesta Bowl, but after it hadn’t gone smoothly during practice, Swinney spent time making sure he and Lawrence were on the same page.

“I actually went over and met with him right before the last drive there, and we talked about two or three things that I felt like we had set up,” Swinney said. “And one of them was the play to Travis [Etienne]. We had run a little quarterback counter a couple of times there. So it was set up. Don't have to have great protection. It is a really hard run fake. He really executed it beautifully and Travis found a way to get through the trash and took it to the distance. Just a huge -- I thought we might have scored a little too quick, but it was kind of like, ‘Maybe he was down at the one,’ but then it's up to your defense to go win the game.”