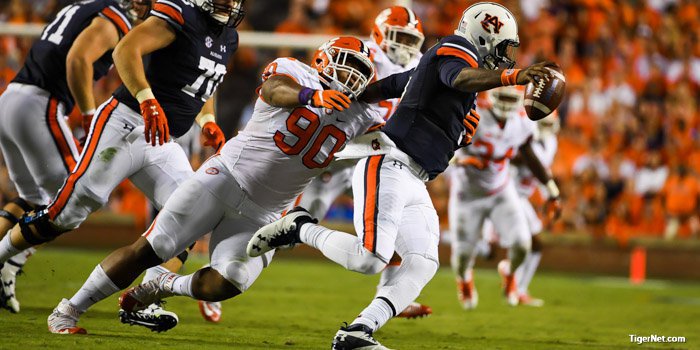 In first Clemson, Lawrence had 10 tackles, a sack and a pass breakup against Auburn.

Dexter Lawrence had a lot of hype following him from his high school career to his freshman season at Clemson, and he lived up to that … and then some.

That started in his Clemson debut against Auburn, when he had 10 tackles, a sack and a pass breakup in Clemson’s 19-13 win.

On Saturday, Lawrence and his Clemson teammates get another look at Auburn.

“I don’t get nervous,” Lawrence said with a smile about last year’s meeting. “I’m definitely smarter. I watched some of that game (Sunday), as well. Looking back, I definitely made mistakes that I probably wouldn’t make now. Just my maturity has risen, and just the film and recognizing little things, I think I’ve grown a lot as a player in that way.”

Lawrence and the Clemson defense got off to a dominant start to the 2017 season last week against Kent State. The Golden Flashes finished with just 120 offensive yards, including 1 yard passing, in a 56-3 loss to Clemson.

Things should get tougher this week as Clemson hosts an Auburn team coming off a 41-7 win over Georgia Southern.

Jarrett Stidham made his long-awaited debut as Auburn’s quarterback in the win.

“We’ve kind of watched film on them. Some of the guys got together and watched a little bit of film on the game they played,” Lawrence said. “(Defensive coordinator Brent Venables) has been telling us that’s he’s their guy, he’s a great quarterback, and we’ve got to go out there focused and try to pressure him, pretty much. We’re all looking forward to the challenge as a defense.”

“We know he won’t be holding the ball long, so that’s us getting our hands up a little earlier, just reading his steps, just coming off the ball and reading the play pretty well,” Lawrence said of Stidham. “He has a strong arm, and he’s very accurate. He’s sneak athletic. You wouldn’t think he’s athletic, but he’s pretty athletic. That’s just some of the things he’s good at.”

Stidham, however, is just a part of the Auburn offense.

Chip Lindsey returned to Auburn’s coaching staff this year to work as the offensive coordinator for head coach Gus Malzahn.

Kam Martin and Kerryon Johnson both rushed for 136 yards and a touchdown last week as Auburn finished with 351 yards rushing.

“They can throw a lot of different stuff at us,” Lawrence said. “We don’t know what they’re going to do. They could come out and do something totally different than they did on film. So right now, we’ve got to prepare for a lot of things with the new offensive coordinator they’ve got and Coach Malzahn there, and we’ve just got to focus on just the things that they do overall and be prepared for it.”