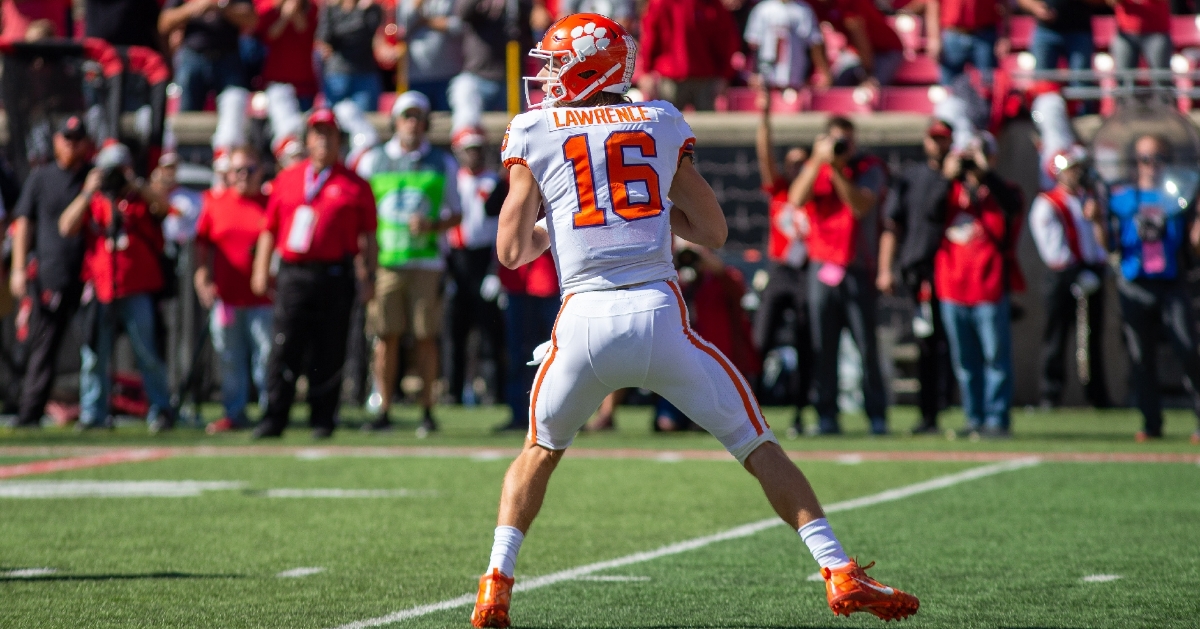 Lawrence looks for an open receiver.

LOUISVILLE, KY – Trevor Lawrence walked to the Clemson sideline following his second interception of the first quarter and right into head coach Dabo Swinney. Swinney had a message for his star player.

Lawrence ended the first quarter a dismal 3-for-7, but the final three quarters saw the Georgia native complete 17 of his last 20 passes for 224 yards and two touchdowns. Lawrence was even a factor in the run game, carrying the ball 10 times to tie a career-high 45 yards.

Swinney said he was proud of the way Lawrence responded after the miscues.

“When you play that position, you are going to be judged on how your uniform looks,” Swinney said. “You are going to get judged on everything that you do. There is a certain mental toughness, thick skin and the ability to have that windshield mentality and let it go. I have been around players where one bad play is going to lead to five more. You can count on it. But I am really proud of him.”

Lawrence faced the media after the game wearing his usual smile.

“They were just bad plays. If something happens and the ball gets tipped and the ball gets picked off, it is not really a bad play,” Lawrence said. “But those, I threw right to them. It is definitely something you have to forget about. It happened. You just have to move on.”

Lawrence each of his first nine passes in the second quarter for 156 yards, including a highlight-reel toss to Justyn Ross for a touchdown at the end of the first half.

“It is all about how you respond,” Swinney said. “He had four bad plays. I don’t know how many plays we had in the game, but he had four bad plays. We can sit around and focus on that or we can focus on all of those good plays. That is what I choose to focus on. We will learn from that. Man! What a job he did for the next three quarters. It was awesome. He ran the ball tough and made good decisions. He got a lot of people involved. I’m really proud of him.”

Swinney said even the great Brett Favre made mistakes.

"I watched Brett Favre in his last-ever game, trying to go to the Super Bowl, he's played 42 years and what does he do? He throws across his body and the ball gets picked,” Swinney said. “He knows he ain't supposed to do that. But he was Brett Favre his entire career because he was mentally tough. When you play that position you're going to get judged on how your uniform looks, everything you do, so there's a certain mental toughness and tough skin required. You've got to let it go. I've been around players in the past, one bad play leads to five more. Like clockwork. So really proud of him for his windshield mentality.

"Sometimes I think he's too confident in not only his arm but his wide receivers. Trying to do too much."