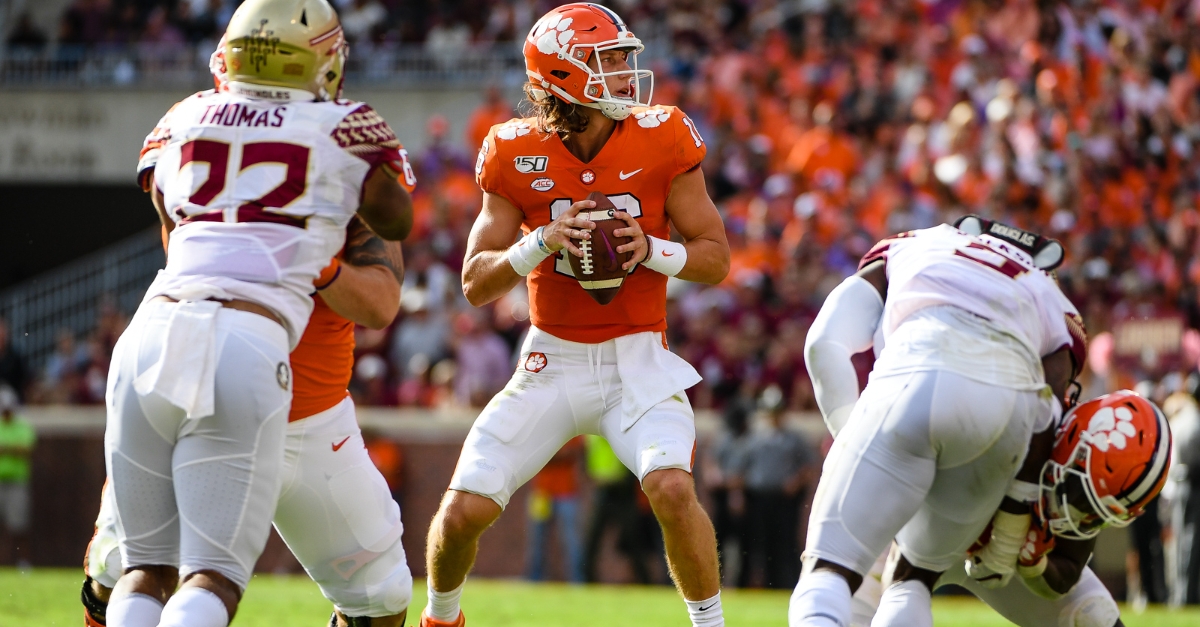 CLEMSON – Clemson’s offense has been scary good the last three weeks, and quarterback Trevor Lawrence is taking more ownership in the plays called on the field.

The Tigers have scored 149 points over the last three games – all of them ACC Atlantic contests – with the starters playing just into the third quarter. Lawrence threw two interceptions in the first quarter against Louisville but has now gone seven quarters without a mistake.

Last Saturday’s victory over Boston College was perhaps his best game of the season, and he says he thinks the coaches are beginning to put more trust in his decision-making.

“I think it’s pretty similar. Our offense is similar, obviously with a few wrinkles,” Lawrence said of the difference between this year and last year. “I think I have more responsibility, I guess, for the things I see in pre-snap more so, but I think our plays and the decisions post-snap are pretty much the same. I think them having more trust in me, the coaches, and just telling them what I see, I think that’s a little bit more. I have a little more impact in that regard. I think just as far as plays go, it’s pretty similar.”

Lawrence also has the latitude to change the protection scheme based off of what he sees from the defense.

Lawrence said he had a long talk with quarterbacks coach Brandon Streeter about which throws need to made and when he simply needs to throw the ball away.

“I think there’s a difference in trying to fit into a window that’s not really there and trying to give our guys a chance,” Lawrence said. “I think the throws where I’ve given them a chance and they’ve made most of them. You’ve seen the one to Joseph (Ngata) and Justyn (Ross ) in the end zone against Louisville, but then there are other ones that just are bad decisions. That’s where I want to get better and I feel like I did this past week.”

The Tigers scored just 21 points at UNC in late September and following an open date of self-scouting came out aggressive against Florida State.

“I think so. I think it’s something our coaches on offense like to do and coach Swinney. Just have some shots,” Lawrence said. “They’ve done a good job of mixing those in there. Travis’ throw against Florida State, that was cool. And then the flea-flicker we didn’t hit but could've thrown to Tee or Justyn. It was still a positive play. It’s always fun when you can take chances like that.”

As a result, the offense is beginning to find its rhythm.

“I think just as the season goes you get more comfortable,” Lawrence said. “You kind of get into a rhythm and I feel like we are figuring out exactly who we are and getting better every week. All that is part of it. I think, not that it’s been really bad this year at all, but I think our focus has been really good at practice. We’ve been intentional these past three weeks especially.”