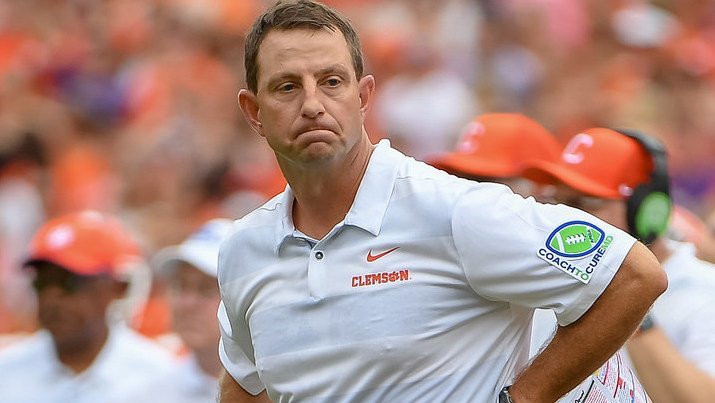 Once the final gun sounds in Winston-Salem Saturday, another emotional week for the Clemson football team will be in the books. On the horizon? An open date and hopefully a little bit of normalcy.

Head coach Dabo Swinney spoke with us after Wednesday’s practice and he was all smiles, telling the media that he hoped things were beginning to settle down after a few weeks of controversy and transfers. Swinney left the media, walked through the weight room and into the Reeves Complex and heard the news no one wanted to hear – running back CJ Fuller had passed away at the tender age of 22.

“We came off the practice field yesterday, had a great practice, and I walked up the stairs and saw Tony Elliott in tears and I knew something was wrong,” Swinney told Mark Packer Thursday. “I didn't know what happened, and still don't know the full details of whether it was a blood clot or seizure or whatever, but they'll do an autopsy and get to the bottom of that. But just a devastating day. CJ was with us for four years and made some big plays for us. You know, I mean some big plays. And I'm so proud of the development he had and the things he was able to accomplish here, and he earned his degree.”

“CJ was a good young man. He has a sweet spirit to him and he certainly wasn't perfect, I don't know anybody that is,” Swinney said. “But, he was a good teammate and players liked him and he was just one of those young people that in dealing with him he was just always so respectful. My heart just breaks for his parents. As a parent, you just can't even imagine putting yourself in that situation. But, I do know, I know that CJ is in the good presence of the Lord, I know he was saved, and I have peace in that.

“I'm thankful I had a few years to be able to be around him. He's the first player I've coached, as a head coach, that has passed. I know it won't be the last. So, I'm just thankful I had the opportunity to see our staff pour into him and to see him grow as a young man. Death is a hard thing, especially for young people, because young people don't really think about their mortality very often. This has been a tough day, a tough couple of days for his teammates. This is a veteran team and a lot of these guys were teammates with CJ. I just lean on the good Lord for comfort and I know that he will provide and see us all through it, and his family, but definitely a sad situation for all involved. Appreciate all the thoughts and prayers for his family and just continue to lift them up.”

I wondered how the football team was dealing with the news of Fuller’s passing, and I’ve been told that the seniors and members of the staff are all taking it hard. Former defensive end Shaq Lawson – now of the Buffalo Bills – was supposed to spend time with Fuller the next day and hasn’t hid his grief.

My guess is that this is something that will resonate for a while, but I’ve also been told that the team has drawn a little closer together over the last few weeks. We will know more about their demeanor about 7:30 Saturday night and the game is over.