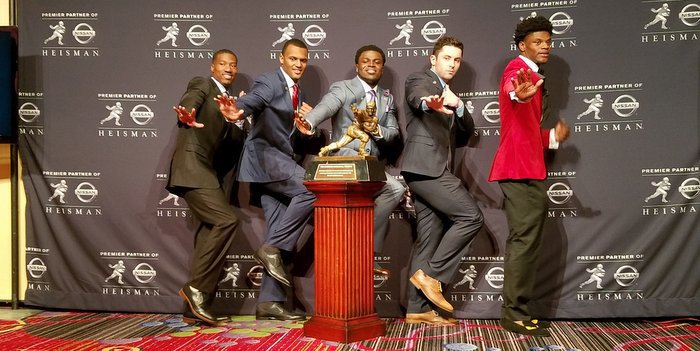 The five finalists pose with the trophy Saturday night

And while Jackson has raised a few eyebrows following his Saturday night victory by posing for pictures with former Heisman winner Johnny Manziel, the sophomore signal caller opened up about his win Monday and told The Dan Patrick Show that he would have voted for Watson.

Oklahoma quarterback Baker Mayfield was third with 361 total points, his Oklahoma receiver teammate Dede Westbrook was fourth with 209 and Michigan defender Jabril Peppers was fifth with 209.

Watson will lead the Tigers in the College Football Playoff against Ohio State at the PlayStation Fiesta Bowl in Glendale, Arizona December 31. He is the only one of the Heisman finalists who will have a chance to play for the National Championship.

Watson’s 269 first place votes rank as the sixth most in history for a runner-up and his 1524 points ranked 10th most by a runner-up. The margin between Watson’s second place ranking and Mayfield’s third place was the widest in the 81-year history of the award.

Had Watson won, however, Jackson would have celebrated with enthusiasm.

“I would’ve been clapping for him (Deshaun Watson) like I won it,” Jackson told Patrick. “It wouldn’t have been different for me, but to actually hear my name, it was like, ‘No way.’ I wasn’t expecting to win this award because there were so many great guys that I was going against.”

Jackson said several current and former players came to his room after his victory.

“Deshaun Watson came by the room. Baker Mayfield is a tremendous guy. He’s a character. He's funny,” Jackson said. “Johnny Manziel came by the room and gave me a lot of positive advice. He was just telling me to have fun in college because you only get to stay there for a certain amount of time and to have fun with it.”

Jackson then got serious and said he would have voted Watson number one, going as far as to say that he felt Watson was robbed when he finished third behind Derrick Henry and Christian McCaffrey last season.

“I felt the same way (voting Deshaun Watson number one). I felt like he got robbed last year,” Jackson said. “I was looking forward to Deshaun winning it. Man, he had a tremendous sophomore year. He was young just like I was – only 19 years old. He did a great job last year and for him to come back this year, I was like, ‘Oh, Deshaun is going to win it.’ There was no doubt in my mind. I was just happy to be up there and talking to him. He’s cool.”

Jackson said he would have gladly given up the trophy to Watson.

“I have no problem with that (Dan Patrick voting Watson first on his ballot) because I would’ve voted for him myself. I would’ve voted for any of those guys because those guys are great, even Jabrill (Peppers) playing all of those positions,” he said. “He’s done a lot for his team. Dede out running all of those defenders and making them look bad. Then, Bake (Baker Mayfield), he’s crazy. He’s nice. I love him at quarterback.”