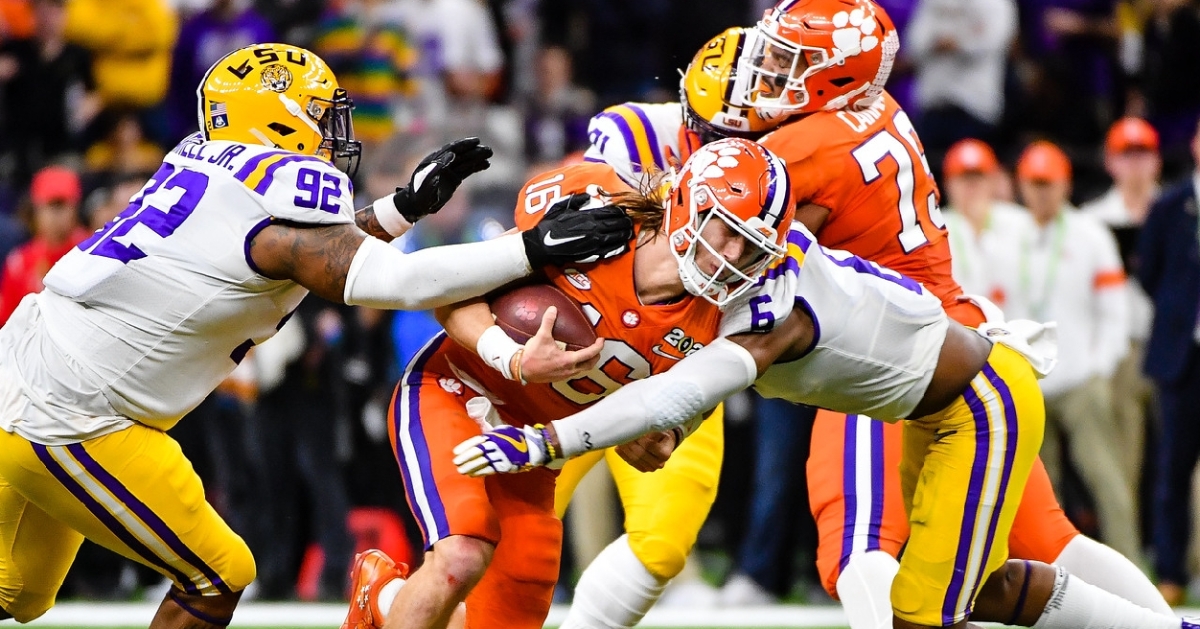 Trevor Lawrence was harassed all night

NEW ORLEANS, LA – There are nights when the other team is just better. When that happens, you tip your hat to them and move on with an eye towards improving the next time you take the field.

Monday night was one of those nights. On a night when LSU quarterback Joe Burrow was super-human, Clemson quarterback Trevor Lawrence and the rest of the Clemson offense looked like mere mortals and LSU walked away with the National Championship with a 42-25 victory in the Superdome.

Clemson made Burrow look human early and raced out to a 17-7 lead, but the rest of the contest Burrow showed why he won the Heisman Trophy with throw after incredible throw. Burrow ended the night by completing 31-of-49 passes for 463 yards and five touchdowns. Wide receiver Ja'Marr Chase was unstoppable, catching nine passes for 221 yards. Lawrence was

The loss ends Clemson’s 29-game winning streak. LSU ends the season with a 15-0 record while Clemson falls to 14-1.

Dabo Swinney gave all the credit to LSU.

"I thought LSU played a beautiful game. I thought their quarterback was tremendous," Swinney said. "Those receivers -- man, they made some incredible plays that were really well-covered, several of them, but they just made the play. And that's what you've got to do to win these type of games. You give them credit, I thought they played a heck of a game and deserved to win the game. They were definitely the better team tonight for sure.

"I'm really happy for Coach O. I think he's one of the good guys in the business, and I'm happy for him. I know what it's like to be in that situation, and you pour a lot into it, and certainly no fun to be in this seat, but I do just say congratulations to them. Beautiful football team that earned it, and we were the first 15-0 team last year, and to see them do it, they earned it. Simple as that. So hats off to them, and I thought they played with tremendous character and class and just will to win. That's what championship games are all about, and just too many big plays and just not quite enough from us when we had some opportunities to give ourselves a chance there in the fourth quarter."

Swinney said the seniors leave with a loss but he's proud of what their class accomplished.

"But again, just proud of our seniors. These guys are leaving here with 55 wins, and this hurts right now, a lot of pain," Swinney said. "I'm disappointed, hurt for all our fans. But what an incredible run. We'll get back to work. We start spring ball six weeks from Wednesday, and excited about next year's team and the challenge of going back to work and putting another team together.

The teams traded two punts apiece to start the game but Clemson got on the board on its third possession. The first play of the possession was a 42-yard strike down the middle to tight end Braden Galloway, who rumbled all the way to the LSU 25-yard line. Six plays lar Lawrence ran untouched over the right side for a touchdown and a 7-0 lead at the 6:34 mark of the first quarter.

On the drive, Travis Etienne became the leading rusher in Clemson football history. The score also marked Clemson's 12th time scoring first this season, the team's most in a season under Dabo Swinney.

LSU finally got on the board on its fourth possession, with Joe Burrow hitting a streaking Ja’Marr Chase down the right sideline for a 52-yard score, tying the game at 7-7 late in the first quarter.

Clemson retook the lead a possession later, getting a 52-yard field goal from B.T. Potter that was the longest in College Football Playoff history. The field goal was also a career-long for Potter, a Clemson football bowl record, his school-record tying third field goal of 50-plus yards this and the 10th-longest in school history.

Clemson forced another LSU punt but faced a long field after the punt was downed at the four. A 24-yard pass to Higgins started the drive, Etienne chipped in a 29-yard run, and Higgins finished the drive with a 36-yard run through the middle of the LSU defense for a 17-7 lead.

Burrow used two completions to Chase – one for 16 yards and one for 56 yards – to push LSU to the Clemson three-yard line. That led to a three-yard keeper from Burrow on third down, and with 9:17 left in the half Clemson held a 17-14 lead.

Clemson reached midfield on its ensuing possession but was forced to punt, and LSU wasted no time in marching down the field and taking its first lead of the night. The drive ended on a 14-yard toss to Chase in the corner of the endzone, and with 5:19 to play in the half LSU held a 21-17 lead.

LSU added another touchdown after another impressive drive to end the half. Four different times Clemson had the chance to get LSU off the field on third down, and each time Burrow and company made a play. The drive covered 95 yards in 11 plays and ended with a six-yard touchdown pass to Thaddeus Moss with just 10 seconds left on the clock in the half.

LSU took a 28-17 lead into intermission.

Clemson needed something good to happen coming out of halftime, and they got it. Clemson held LSU on the first series of the half and forced a punt and Clemson took over at midfield. Etienne carried the ball the last three plays of a six-play drive, the last one a three-yard scoring run. Down by five, Clemson elected to go for two and Lawrence found Amari Rodgers in the end zone for the two-point conversion. With just four minutes gone in the third quarter, LSU held a 28-25 lead.

Clemson forced another 3-and-out from LSU but couldn’t make anything happen and punted it right back. Six plays into the drive, Clemson linebacker James Skalski was called for targeting and was ejected from the game. One play later LSU scored on another short scoring pass to Moss and led 35-25 with 5:13 left to play in the third quarter.

LSU added to the lead with a 24-yard Burrow pass to Marshall early in the fourth quarter.

Clemson vs. LSU Stats
Get the latest Clemson gear right here!
Comment on this story