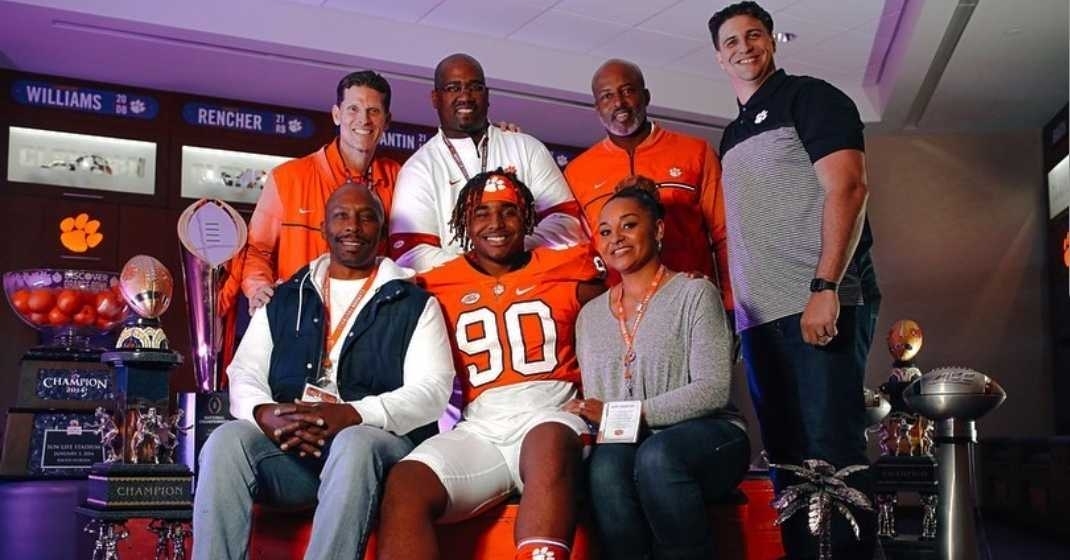 Clemson is still in the running for Korey Foreman.

Foreman, the 5-star defensive end and former Clemson commitment out of Corona (CA) Centennial, released his latest top schools list on Wednesday and Clemson made the list.

Foreman decommitted from the Tigers in late April but included Clemson as one of seven schools he is focused on, along with Alabama, LSU, Georgia, USC, Oregon and HBCU Howard University.

"As a young black man there are already plenty of things to be cautious about growing up," Foreman said on social media, "but it’s not about the things that scare you, it’s about the things that help build you to become greater then you were 24 hours ago. These are the schools I will now be focusing on the most. This one is for the next generation and others who are trying to make a name for themselves."

Foreman is rated the No. 1 prospect by Rivals.com, No. 2 on 247Sports and No. 3 on ESPN. Southern Cal is currently favored to sign Foreman by 247Sports' Crystal Ball.

Foreman said he is trying to rebuild his relationship with the Clemson coaching staff.

“I would say I’m trying to build as much of a rapport back with them as possible,” Foreman said. “I’ve been busy and I haven’t been reaching out to that many college coaches. But now that my top seven is out, I have told myself that I need to face reality. So I’m going to reach out and I’m going to be the best I can to see where I fall, and whoever wins, wins.”

Defensive tackles coach Todd Bates is Clemson’s lead recruiter with Foreman, and he has done his best to keep open the lines of communications.

“We talk as much as possible, but like I said, I haven’t been able to reach out due to all that’s been going on which made me push everything back,” Foreman said. “Let’s say all this was marked out and I would have all the time in the world to be able to reach out to all those college coaches again, me and Coach Bates were like best friends.”

And if there were any doubt about Foreman’s seriousness about Clemson this time around, he said there should not be. He said he feels the same toward the Tigers as he did leading to his commitment.

“I do, I do, but certain things I’m taking under consideration,” Foreman said. “I like doing research and little things about different colleges and other things like that. I’m just trying to pay attention and know exactly if I do go to Clemson, where I’m actually committing to and a whole of other stuff like that. The next time I commit will be the last time I commit.”

Foreman has not set dates for his official visits but he confirmed that three of them will be to Clemson, Georgia and LSU. So, what will he be looking for this time as he goes through the process again?

“It’s not really what I’m looking for,” Foreman said. “I mean, I committed to Clemson for a reason, and it is because I actually loved it. But right now it’s just me being able to sit back and take my time on everything. But if me committing back to Clemson happens, it will be because of everything that made me want to commit in the get-go.”

Clemson has two defensive end commitments in the class in Cade Denhoff and Zaire Patterson.

I am a young black man that is happy and proud of my race .. The Black Lives Matter movement is and forever will be powerful and definitely never forgotten .. As a young black man there are already plenty of things to be cautious about growing up, but it’s not about the things that scare you, it’s about the things that help build you to become greater then you were 24 hours ago. These are the schools I will now be focusing on the most . This one is for the next generation and others who are trying to make a name for themselves .. BE DIFFERENT