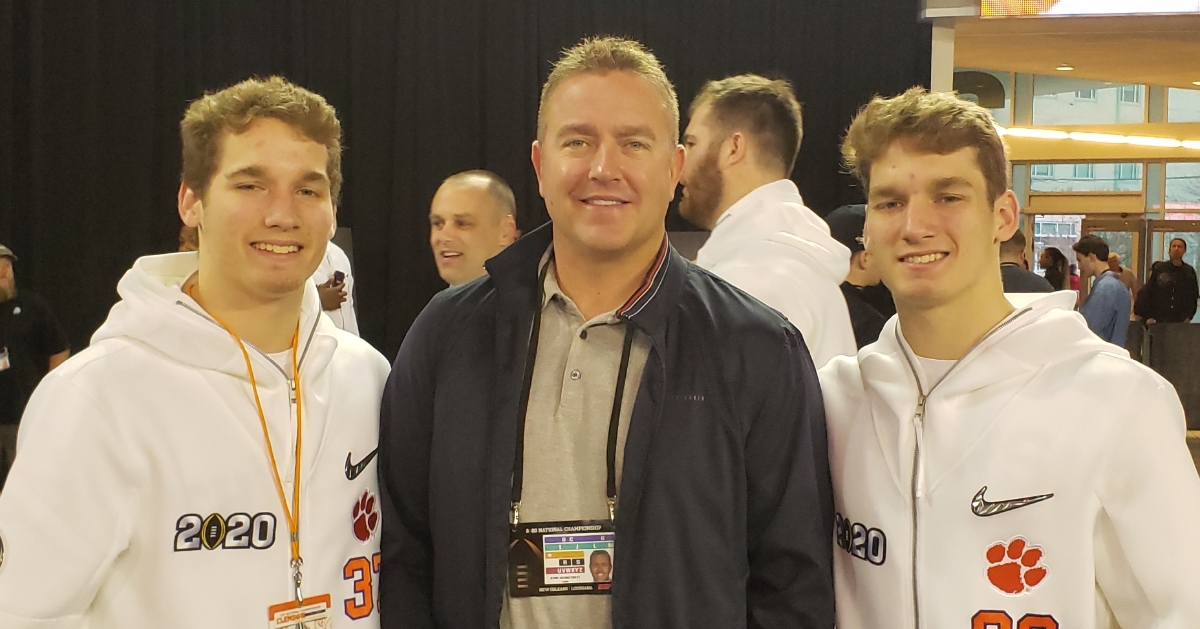 Herbstreit poses with his sons in New Orleans.

ESPN college football analyst Kirk Herbstreit has two sons who play at Clemson, and even though they carry that famous last name with them wherever they go, they are trying to make a name for themselves.

Herbstreit was a guest on On the Call with Jeff Rimer last week, and he said a conversation with Clemson head coach Dabo Swinney let him know his sons Tye (wide receiver) and Jake (a defensive back) are pointed in the right direction.

“They really feel at home (at Clemson). They really feel good about where they fit in,” Herbstreit said. “Dabo called me— we were talking about a number of things and I really stay out of it unless he brings it up, and at the end of the call, he said I just want you to know everybody is really fond of your boys because they are trying to make a name for themselves and they never talk about who they are, and they just want to work and earn their own way.

“All the players, staff, everybody loves them. And me knowing them, that's what I would expect from them, but to hear Dabo see that and feel that— he has two boys of his own trying to do the same thing. So things are good, man. I have another boy, a rising senior and he's looking at maybe trying to go to Ohio State. We'll see if that is able to work out. I have an eighth-grader as well and he also plays football."

Tye and Jake redshirted last season but still were able to be a part of Clemson’s run to the title game.

"They redshirted last year and were able to participate in not just the home games, but they were able to travel out and be a part of a surreal moment for them against Ohio State in the semifinal game, a team they grew up worshipping,” Herbstreit said. “They got to look on the other side and even though they weren't playing, still surreal to look and see those uniforms. They got to dress in the national championship game and they came up short vs. LSU, but pretty cool for them in their first year to get these two rings that are just massive. So that was really cool. “

Herbstreit then said that both boys have been forced to undergo quarantine.

"Jake and Tye went back to Clemson on May 31. Clemson showed up with only about two players who tested positive, and now they're around 30 or so,” he said. “My boys tested negative. Their roommates tested positive, so now they are labeled as 'direct contact' so they are quarantined now for 14 days. And they'll be tested again after that 14-day quarantine, and hopefully, they'll still be negative.

"Now everything up to this point has been voluntary. College football is just trying to figure things out, and it's kind of a ready, fire, aim situation. The rules of engagement seem to be changing daily.”

Herbstreit was asked how he feels about a college football season in 2020.

He then weighed in on whether he thinks we will see college football this season.

"I'm very optimistic that we are going to see some effort to have a season,” Herbstreit said. “It's really changed. If you would have asked me that three weeks ago, I would have said man I feel I great. This thing is going in a great direction. But as you watch the news and follow this thing, you see spikes all over the place. I don't know if protests contributed to this or people not necessarily fearing the virus, but I think a laissez-faire attitude has really affected things. We don't have a Roger Goodell in college football. You have the NCAA, which is not really even a governing body over college football, so you have rely on the Power Five commissioners.