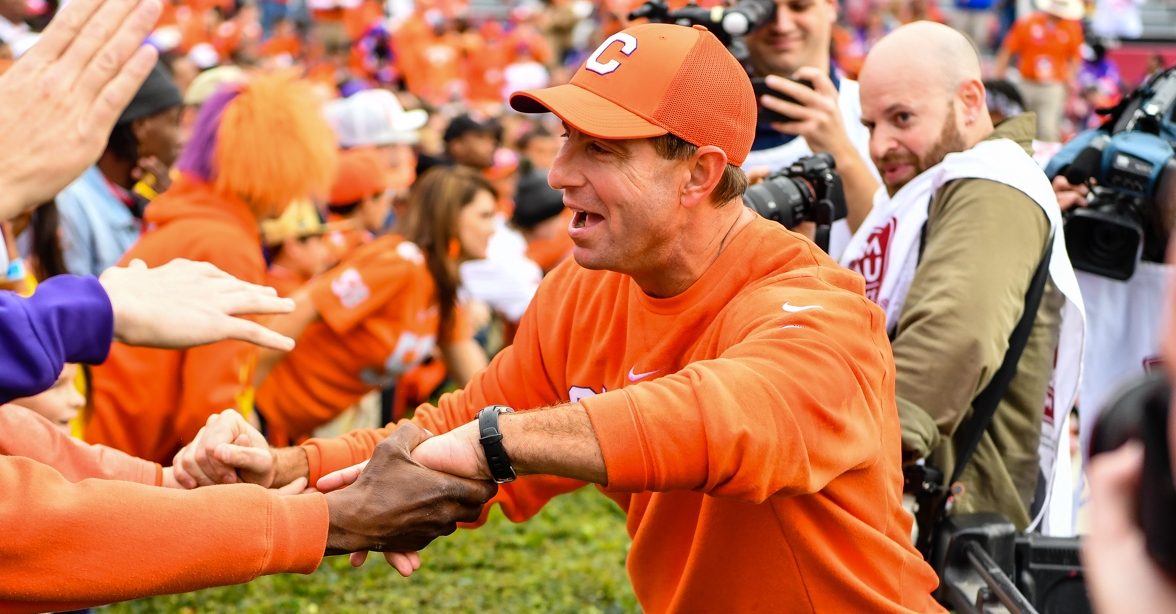 Swinney greets Clemson fans after the victory at South Carolina.

ESPN college football analyst Kirk Herbstreit isn’t surprised that Clemson head coach Dabo Swinney has a positive outlook on whether the 2020 college football season will be played. After all, it’s in Swinney’s nature to look at the bright side of things. In Herbstreit’s words, Swinney is an “all systems go” kind of coach.

Swinney recently said that he believes the college season will be played.

“I just believe in our country,” Swinney said. “I believe in this world. I believe in the unbelievably smart people that we have out there. But more importantly, I believe in God. And he’s so much bigger than this. There are so many fearful things, but God can stamp this thing out just as quickly as it rose up.

“And I don’t have any doubt that that’s what’s going to happen. That’s my belief. Now if someone wants to blast me because I believe things are going to turn around, well that’s fine. They can blast me for that. That’s OK if that’s what they wanna do. I just try to live my life with positivity … I believe we are going to kick this thing in the teeth, and nothing’s going to change that belief from me.”

“There are some people who are the glass is half full and other people who the glass is overflowing,” Herbstreit said. “He’s just all systems go. It's very similar to how he is when he talks with the media. He’s moving forward as if players are going to be on campus in June and getting them ready for camp in August and for the season early September.”

Herbstreit’s twin sons Jake and Tye are freshmen on the Clemson football team, and he was asked how much Swinney stays in contact.

“He communicates with the team. I try to stay out of what my boys are doing,” Herbstreit said. “Sometimes they are up in the their room and they are in some kind of communication with a coordinator or position coach or with Dabo. They have different meetings throughout the week. I am not up to speed on how often he does that. Occasionally they will kind of let me in on they just had a meeting with Dabo but don’t get into what they talk about.”

He then said that he knows the coaches are doing everything they can to encourage players to take their workouts seriously.

“I know he’s trying to encourage them to stay in shape probably like every coach,” Herbstreit said. “Trying to get their workouts in and make sure they’re eating and doing what they need to do because you just never know with this pandemic. May 1 may come around and then there is phase one, two and three and you just never know when these kids are going to be turned loose.

“And if you’re sitting there assuming it’s not going to be until August or September so I’ve got time and all of a sudden you’re back on campus in June or July you better have been working out. As of right now, they've been away from campus for four or five weeks, right? I think they’re just trying to encourage these players how important it is to try and stay in shape as opposed to trying to get back into shape once they get back on campus. But (Dabo) is a very positive, very encouraging, very uplifting guy, and if you know him that is who you would expect him to be.”