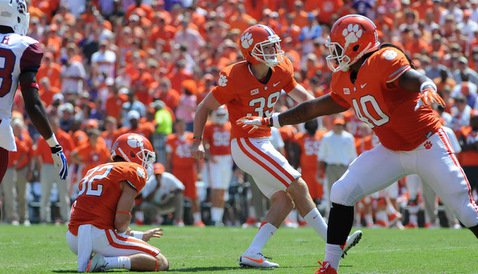 Catanzaro came to Clemson as a walk-on from Christ Church and earned a starting job as a redshirt freshman before becoming Clemson’s all-time leading scorer, and it’s no surprise that the Greenville native is ready to do whatever it takes to earn a spot on the Arizona Cardinals roster.

After not hearing his name called during the NFL Draft last weekend, all Catanzaro could ask for was a chance – just as he did when he stepped on Clemson’s campus in 2009.

“Clemson was gracious enough to give me an opportunity to walk-on, and again that's all I wanted,” Catanzaro told TigerNet Monday evening. “An opportunity is all that anyone can ask for in life. It's just another opportunity. I've got my foot in the door with Arizona and I'm going to try and make the most of it. That's all I can do. I just have to take the process day-by-day and when it's all said and done look up and see where I stack up. I'm just going to try to do my best every day.”

Since Catanzaro’s Clemson career came to a close, his future was in a state of flux, but that changed Sunday.

“Fortunately, they were one of the teams to work me out, so I definitely knew they were interested throughout the process and coach Amos Jones - the special teams coordinator - kept in contact with me pretty much weekly, so I knew that Arizona was interested,” Catanzaro said. “That was nice to have that in the back of mind because there is a lot of uncertainty during that period from the Orange Bowl all the way until a couple of days ago during the draft. I knew that the draft might be a little bit of a long shot as a kicker, but I knew that if I got an opportunity that's all I wanted. I'm so excited to have an opportunity to do what I love and hopefully make a little money with this right leg that I've got.”

Catanzaro was made 67-of-82 of his field goal attempts and 203-of-207 extra points, but he will need to show the Cardinals more in order to battle incumbent Jay Feely for playing time.

“Pretty much to just do my best,” Catanzaro said. “They definitely want a kicker that can boom kickoff and get touchbacks for them and boot them into the endzone every time - that's what they're telling me. They said they know that I can put it through the pipes, but they want to see that I can bang them through the endzone. I've been hitting kickoffs really well lately, so I'm excited to show everybody what I can do.”

Lucky for Catanzaro, the transition to the NFL and to the Valley of the Sun will be little easier with fellow Clemson alum Andre Ellington

“I saw them a little bit today. I walked into the locker room and saw him [Ellington],” Catanzaro said. “I'm lucky to know somebody here. It's definitely a big move all the way across the country from South Carolina. It was tough leaving my family yesterday. I love them to death and it was tough to leave them on Mother's Day. My mom was having a tough time. It's definitely good that I know some people here. There is definitely some Clemson in this Arizona program, so I'm very excited to have Andre and Jaron here to show me the ropes a little bit.”