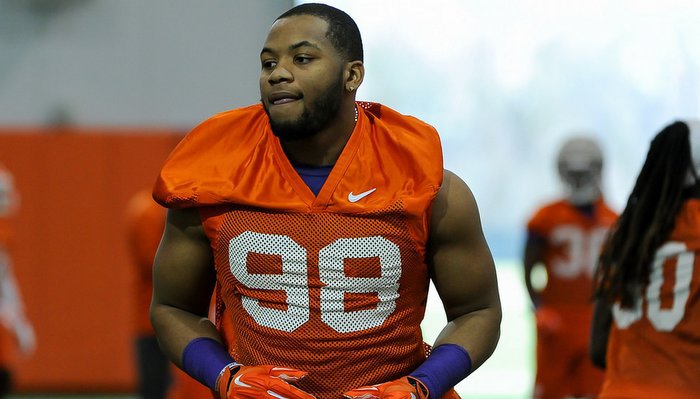 Dodd has been one of the standouts in Clemson's camp

Kevin Dodd
RS Jr. Defensive End
#98 6-5, 275
Taylors, SC
View Full Profile is ready to take a stand and make a name for himself.

The rising redshirt junior defensive end out of Riverside High School has logged just 219 snaps over 24 games during his Clemson career, and his road to a possible starting spot has been littered with obstacles.

A non-qualifier out of Riverside High School, Dodd had to spend a year at Hargrave Military Academy before gaining entrance at Clemson. Following a freshman season in which he made six tackles in 87 plays over eight games, Dodd was expected to provide depth along Clemson’s defensive line in 2013. However, he suffered a shoulder injury following the fourth game and missed the rest of the season and was granted a medical redshirt by the NCAA.

Tavaris Barnes
Defensive End (2010 - 2014)
#9 6-3, 275
Jacksonville, FL
View Full Profile and snaps have been hard to come by for Dodd, who confidently has said he is ready to make a name for himself and take the stand that he is ready for increased playing time.

“I haven't made a name yet or done anything. But I am very confident and I trust in my abilities and I trust in my coaches and the plan they have for me,” Dodd said early in spring camp. “I am just ready to go out there and take a stand. I am doing well. I am just out there to learn and get a little better each day.”

Dodd said he has had the right kind of role models during his time at Clemson.

“Let's start with the leaders. I had Malliciah. I had Corey. I had Vic (Beasley). I had Tavaris. I've gone through them all since I've been here,” he said. “And this will be my fourth year, my redshirt junior year. So sitting back and watching those guys and what they've done and where they came from and where they are now is like I am filling big shoes but it was great learning from them.”

How good will Dodd – and the rest of Clemson’s defensive line – be without those leaders?

Dodd said there are ready-made leaders all across the defense.

“Shaq (Lawson) always plays a role as a leader. You have myself. D.J. Reader

His personal gameplan? Come out every day and work like a man who is ready to make a name for himself.

“Just go hard every day. Come in with an attitude that I have to get it done,” Dodd said. “Taking my weight serious and my diet serious. I am coming out here every day and taking my mental preparation seriously and going hard.”