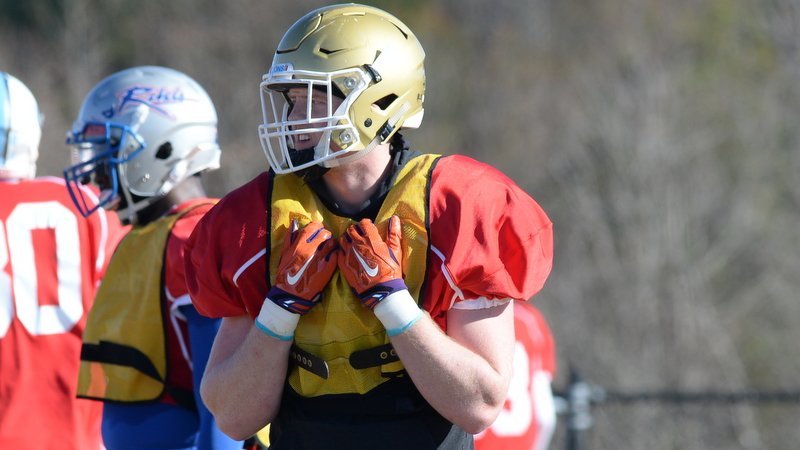 Venables has been impressive this week

ROEBUCK – Dorman head coach David Gutshall is the head coach of the South Carolina squad in this week’s Shrine Bowl of the Carolinas, and that allowed us to catch up with him to ask about a few players.

Gutshall has, of course, coached Jordan McFadden, Clemson’s newest 2018 commit, the last few years and we started out by asking about McFadden.

Gutshall says the light came on for McFadden this season and that the prospect's best football is in front of him.

“His best days and his best football are in the future,” Gutshall said. “We've said that all along because he's played his best football last fall. He has great feet - as good a pair as I've seen for an offensive lineman that I've ever coached. And I've had a few go to the NFL. So we feel pretty good about that.”

What allowed Clemson to take McFadden away from Virginia Tech?

“I think we are in Clemson territory here,” Gutshall said. “Virginia Tech did a great job of recruiting him and everything, but when Clemson jumped in it was hard for Jordan to say no. He is football smart. He is really football smart. You only have to coach him once. He understands the scheme and I don't think you can be any smarter of a football player than Jordan is.”

Clemson wide receiver commit Derion Kendrick is also on the Sandlapper squad, and Gutshall says Kendrick has been impressive.

Venables has been impressive this week "

“He is a tremendous athlete. You look at him and you think, 'This is going to be tough coaching him.’ But it has been the absolute opposite,” Gutshall said. “On the field, we don't have anybody that goes any harder or faster than he does. DK is going 100 miles an hour on every snap. He may have that swagger as he walks up, but he loves playing football and he wants to play every position. It's great. I've enjoyed being with him this week.”

Clemson linebacker commit Jake Venables has been the quarterback of the defense for South Carolina.

“He's smart and he plays well. There is no doubt he is a coach's son. He is like a quarterback out there, lining people up, and in an all-star game, you need that because a lot of them are playing a defense they aren't used to playing,” Gutshall said. “And like I told the kids at the end of practice, most all-star games are lost because you can't get lined up. You have kids playing funny positions and they just can't get lined up. That is going to be important. He plays hard, he is a good downhill player and I've been impressed with his intensity level. I guess he has his dad's personality. He gets after it and he gets excited.”