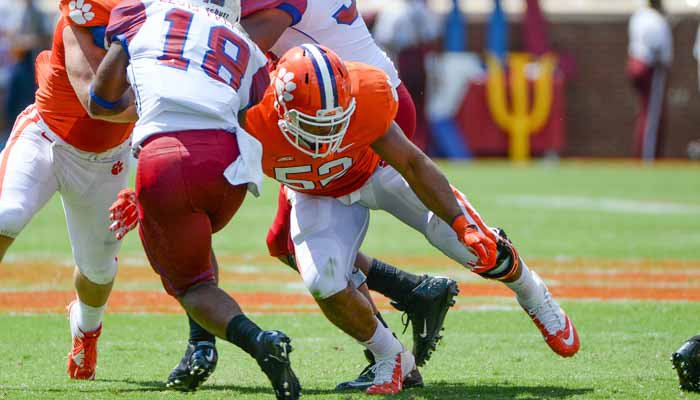 Kellen Jones
RS Jr. Linebacker
#52 6-1, 233
Houston, TX
View Full Profile sat down to talk with the media Monday afternoon in the WestZone, and just as the cameras began to roll a klaxon alarm began to sound.

Jones sheepishly pulled his wailing phone from his pocket, and told the gathered media that he had an alarm set so he wouldn’t miss his interview session. In other words, with so many injuries and time spent watching other players make plays, a healthy Jones doesn’t want to miss any chance to make an impression.

Injuries and playing behind established players like Stephone Anthony

Ben Boulware
So. Outside Linebacker
#10 5-11, 235
Anderson, SC
View Full Profile battling injuries this week Jones knows his chance to impress might be at hand.

Jones has 19 tackles in just 80 snaps this season, and defensive coordinator Brent Venables

Brent Venables
Def. Coordinator / Linebackers
View Full Profile told the media Tuesday that Jones is the kind of player a coach can win with.

“He’s got good football intelligence, for the most part,” Venables said. “He’s a good player. He’s an excellent player. He’s not a liability out there. Kellen’s a neat young guy that’s got a unique background. I’ve recruited guys here, too, that I have the same kind of relationships with, but from a linebacker standpoint, it’s a little bit unique.”

Jones told TigerNet during the interview session that while he wants to play and start now, he also understands that any playing time he gets Saturday and beyond is an audition for next season.

“Yes, as far as establishing myself and getting my name known and be prepared for the moment next year,” Jones said. “I want to get my name out on the board, and get used to it so I can take advantage and get my name out there for next year when those two guys (Anthony and Steward) leave. Coach Venables wants me to be prepared for this moment I have right now and take advantage of it.”

Jones said that his father Sean Jones played college football, and now lives close enough to where the two talk regularly about how to handle the ups-and-downs of being a college football player.

“I wouldn’t be here without him,” he said. “Even when I was in high school and trying to get recruited he was like, ‘Kellen, just make sure you perform and I will get you recruited. You just make sure you have film.’ He coached me for two years in little league, and he is my backbone. Every time he comes, I look up in the stands and look for Pops. I don’t know where I would be without him.”

Jones’ family moved to Atlanta last summer in order to be closer to their son, and he said it’s been good to have their support this season.

They even bring the Kellen Jones Fan Club along for the ride.

“They are able to make the home games and the road games, and I absolutely love that,” he said. “Especially my two little brothers, they think I am an all-star and the best player ever. They are six and five years old, and they absolutely love that. They were holding up signs last week that said ‘Kellen Jones No. 52 is my brother’ and that really touched me. I loved that.”