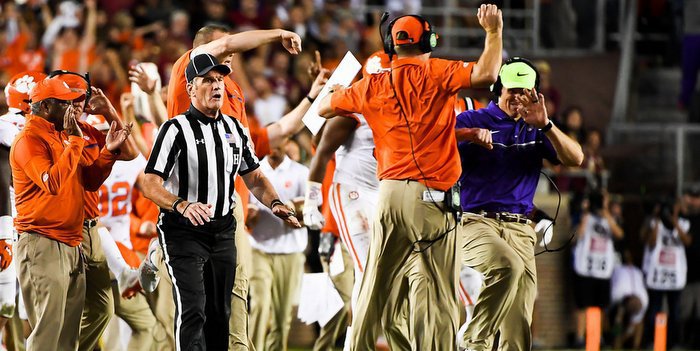 Venables has reason to celebrate

CLEMSON – Defensive coordinator Brent Venables has been arguably the nation’s most valuable assistant coach over the last several seasons, and the Clemson Board of Trustees is set to approve a new contract for Venables Thursday morning that is the largest known contract in college football for an assistant coach.

A source told TigerNet late Wednesday that the Board of Trustees will meet early Thursday and extend Venables' contract to a five-year deal worth a total of $11.6 million dollars. Head basketball coach Brad Brownell, whose team made the Sweet 16 this past season, and football strength and conditioning coach Joey Batson are also expected to receive raises.

Venables received a substantial raise last season when Clemson raised his pay to $2 million — making him the second college football assistant coach to join the $2 million club. According to the most recent database, Venables' salary ranks only behind LSU defensive coordinator Matt Arnada, who earned $2.5 million.

Aranda averages $2.5 million per year for four seasons. Venables will average $2.3 million, but his total of $11.6 surpasses Aranda’s $10 million contract total and makes it the largest in college football.

The contract doesn’t include a buyout for Venables to take a head coaching job, but if Venables were to leave for another assistant coaching position he’d have to pay 25 percent of the total remaining on the agreement.

Venables’ son Jake recently enrolled at Clemson and will be a freshman linebacker on the football team this fall. His other son, Tyler, plays football at nearby Daniel High School and has been offered by the Tigers. Venables has often said that he doesn’t pursue head coaching opportunities – it was rumored that he turned down Arkansas last year (former Clemson assistant Chad Morris took the job) so he could stay with head coach Dabo Swinney.

Brownell’s salary of $1.8 million ranked ninth out of 15 ACC coaches, However, his team finished with a 25-10 record in 2017-18 and reached the Sweet Sixteen of the NCAA Tournament.

Batson was the nation's fourth-highest-paid strength coach in 2017, with total compensation of $450,000.

TigerNet will attend the Board of Trustees meeting and have updates as we learn new details. Final numbers still have to approved for all three at the Board meeting.