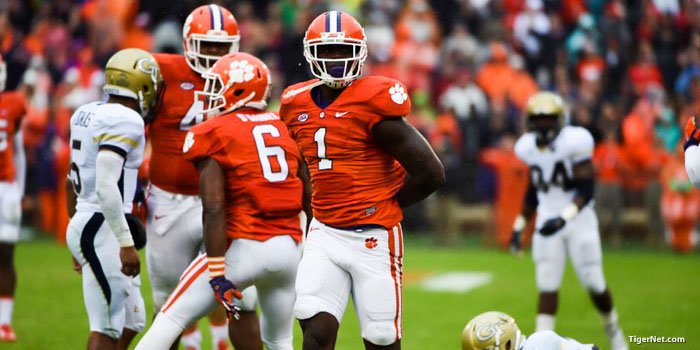 Kearse said he is focused on beating Oklahoma

CLEMSON – Jayron Kearse isn’t worried about Oklahoma, and he isn’t concerned about his status for the NFL Draft.

He just wants to win a National Championship.

Earlier this week, some Oklahoma players said they were upset that Clemson unveiled a tombstone following the Tigers’ 40-6 win over the Sooners in the Russell Athletic Bowl last December. Clemson has a tradition of “tombstone games” in which they beat a ranked team on the road, so the tombstone was nothing new. However, Sooner players said they will take it into account when the teams meet later this month.

Clemson’s defense held Oklahoma to 17 first downs and just 275 total yards last year, but has struggled in recent weeks. The Tigers also played 10 consecutive weeks after an open week in late September, and Kearse said getting healthy is the key to a better Clemson defense. That, and a little more focus.

He’s seen a different attitude at practice this week.

“Just focus. Get our bodies back right. Get healthy,” he said. “Just go out there and play our type of football. I think we will be fine. They don't do anything we haven't seen this season. Everything that has been going on with us has been us.

“Guys have energy. Guys out there having fun. Flying around. Doing things that they have to do. Just encouraging other guys. I definitely feel like we are going in the right direction to go out and have a good bowl game.”

It has been rumored that Kearse is strongly considering jumping to the NFL after this season, but he said that he is focused only on the Sooners and will discuss his options in January.

“No. I am just focused on going out here and playing football and helping my team get these last two wins and bringing home the National Championship,” he said. “Later I will just do what is best for me and my family. But don't lose focus. Keep playing football for my team and going out there and giving everything I’ve got.”

He then said he also knows he needs a good showing against the Sooners after struggling in recent weeks and gave himself a season grade.

“Right now I probably give myself a 7. I haven't played my best football at all,” he said. “I'm going out there these next two games and do what I was doing the first part of the season and close out the season on a high note.”