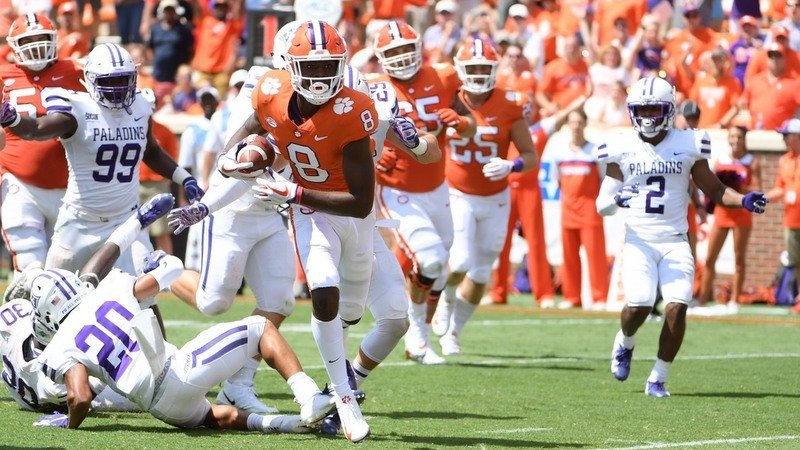 CLEMSON – Justyn Ross’ name doesn’t show up a lot in the final stats, but you couldn’t tell that from the big smile on the freshman’s face when he walked into the interview room underneath Death Valley following Clemson’s 48-7 win over Furman Saturday.

Ross was targeted twice Saturday afternoon and had two catches for 16 yards. However, one of those catches came on a slip screen and he slipped into the end zone from 15 yards out for his first collegiate score.

The touchdown reminded wide receivers coach Jeff Scott of another freshman who scored in that same end zone in his first collegiate start – Sammy Watkins.

“He’s off to a good start,” Scott said. “Just like Sammy, who scored in his first game.”

Ross said Scott mentioned Watkins during fall camp, and as he crossed the goal line and saw the official give the signal for a touchdown, he thought about what Scott said.

He also feels fortunate to build on the legacy of Wide Receiver U.

“I remember him saying that. He said it way back in a meeting, and when I got my first touchdown that is all I could think about was Sammy, Sammy, Sammy,” Ross said. “It means a lot because Sammy left a great legacy here. There are some great receivers to build off of. It means a lot.”

Ross once again broke out in a big smile when he was asked if he was thinking touchdown when he heard his number called for the screen play. The play came after freshman Lyn-J Dixon broke off two long runs that gained 77 yards.

“I kinda was. Usually, on a screen you think you are only going to get a couple of yards, but I saw the hole open up and I couldn't help but to go,” Ross said. “I am glad Lyn-J took off like that. He has been doing it in practice all year so it was great for me to get out there cap it off with a touchdown.”

The Alabama native had more than one carload of family and friends make the trip from Phenix City (AL) – right on the border of Alabama and Georgia – for the game, and he admitted to having a few butterflies before kickoff.

“There was a little bit (of nerves). I thought I wasn't going to be nervous, but I was,” Ross said. “I don't usually get nervous when I am playing, but there was a crowd out there like I've never seen before. Everything went well, though. It was great. It was a great feeling. I had my teammates getting me comfortable, so I wouldn't be nervous. It was a great experience.”

Ross is just one of a bevy of talented freshmen that saw action Saturday, and he said he thinks the 2018 recruiting class might be the best to walk through the doors at Clemson.