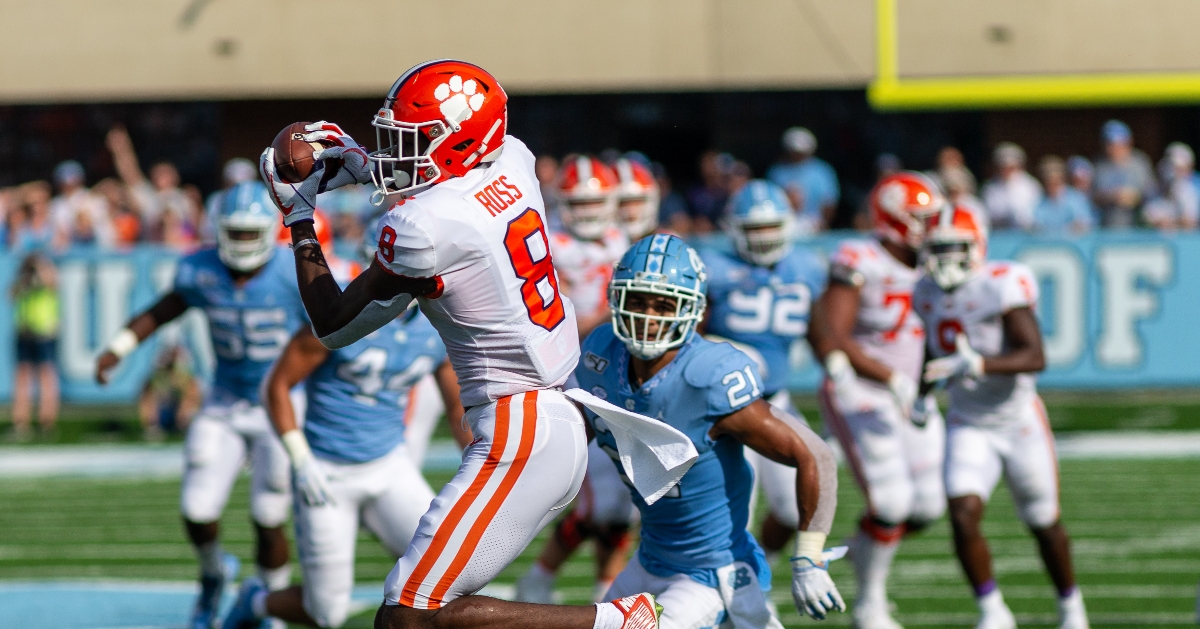 Ross is known for making the tough catch.

Justyn Ross thrilled the country with his unbelievable catches in the 2018 College Football Playoff, and admiration for his abilities grew after Ross showed out in the win over Alabama. His high school coach has seen it all before.

Ross had surgery last week to repair a congenital fusion (two fused vertebrae appear structurally and functionally as one). The rising junior will miss the 2020 football season as he recovers from the surgery, and there is no guarantee that he will play football again.

His former head coach at Phenix City (AL) Central, Jamey DuBose, told TigerNet earlier this week that he thinks Ross will come back better than ever. As for those catches – DuBose has seen it all. The 44-16 thumping of Alabama didn’t surprise him.

“The funny thing is, is I was sitting at a Buffalo Wild Wings of all things in Auburn, Alabama, where there were kind of mixed reviews in the whole building,” DuBose said. “But as we sat there and watched the game and I've watched over and over again, and I'll never forget, the people around being amazed. And I'm just sitting there looking at my wife, thinking I've seen him do that a thousand times. And we went to school the next day and guys that he played with and guys that he went to school with guys that's been at practice with him, we were all standing around going, ’Why are they making a big deal out of those catches? We have high school catches that Justyn made was bigger and tougher than catches?’

“And he's just got a remarkable ability to catch a football. He can catch it many, many different ways. I'll never forget one year spring training and watching them shoot balls out of a Jugs machine. And he's 10 yards away and they're shooting balls that spiral and out as hard as you can just about shoot it. And he is just slapping at it, catching it with one hand, like it's a fly or something. And I stood there with several coaches on the field that day as they were watching in amazement, too. But this guy has just got an unbelievable ability to catch a football many different ways. In 7 on 7 tournaments, we've been to, everything else, we have seen those catches he made against Alabama over and over again. And it didn't surprise any of us in Phenix City, I can tell you that, anybody involved with the Central football program.”

Ross emerged as a freshman in 2018, recording 46 receptions for 1,000 yards — an excellent 21.7 yards per catch average — and a career-high nine touchdowns. He increased his catches by 20 in 2019 by posting 66 but fell short of the thousand-yard mark with 865 (13.1 average) for eight touchdowns as a sophomore.

DuBose said that Ross is the ultimate competitor.

“Even last year when he was making catches, I think against Ohio State, and he made that crucial catch on that last drive on the slap pattern and he was injured,” DuBose said. “He had left the game and come back to the game. That's what kind of competitor he is. He is a guy that's got the unbelievable ability to not give up to pain. And he is a tremendous competitor for his teammates. He has always done, no matter what it was, the best he could do for his team, his community, whatever it is.

“And I can tell you in this little setback right here, he's going to be hurting all football season. When this thing happened, he didn't want to talk or be around people because he's such a competitor and he was looking forward to the season and it was a really hurtful thing to happen. And then, he's got to hear people say, ‘You'll never play again.’ All that does for Justyn Ross is challenge him to go get better. So I fully expect Justyn to be back out on the field when the time comes, but him and his family are going to make sure they do whatever they got to do, that his health is important and he gets everything right before he gets back out there.”

DuBose finished by saying he took notice of Ross early on, when Ross was just a freshman.

“The first day, I walked in the weight room and saw him walk in the door. I said, ‘Wow.’ That was the first thing I said. We had some really good looking guys, but when he walked in, he looked like he was a junior or senior. And I said, ‘Who's that guy?’ And they said, ‘That's Justyn Ross. He's a ninth grader.’ And I went, ‘Unbelievable.’ And so, I've only had two ninth graders in my career of coaching in Alabama,” DuBose said.

“We've had some really good kids. I've signed 14, 15. Well, I got three right now at Clemson, I believe, but I've got some at Alabama and other places. But in my career of getting all these kids signed and having the ability to coach all these great players, that makes you a better coach, by the way, at the end of the day, the better players are, I found out the better coach you are, but the ability to have these guys... Justyn is one of two ninth-graders that have only played for me in my career. I've never pulled a ninth-grader up because I don't believe they're mature enough. I don't believe they're ready. And I want them to stay with their group.”