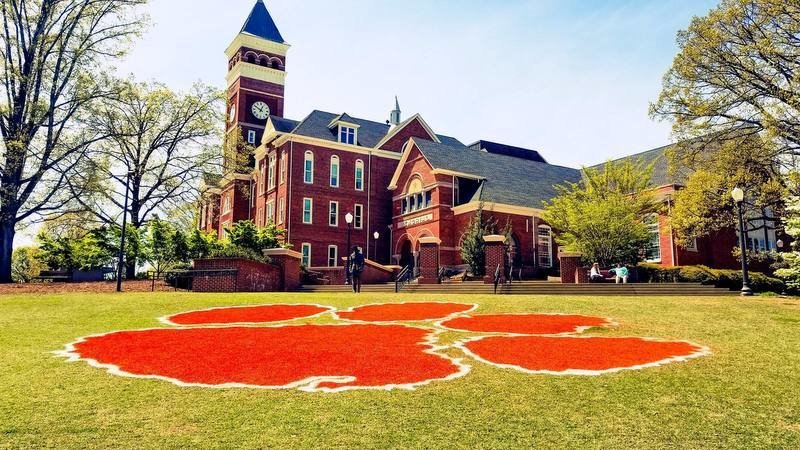 The Tiger paw has been prominent on Bowman this week

Clemson head coach Dabo Swinney is no stranger to excitement, and some might believe that he can’t be that excited about everything all the time. But when he says he is more excited about this spring game than any in recent memory, I believe him.

Spring games are nothing more than glorified scrimmages. The teams split up and fans get a rare chance to see their favorite school in action one more time before the long hot summer. We usually don’t learn a lot in spring games.

This one feels different.

I’ve walked out of recent practice sessions with the knowledge that this team is good enough to win a National Championship. As one respected coach who watched practice told me, there are “dudes” everywhere. A “dude” in sports parlance is a player who rises above the norm in terms of talent and drive. There are “dudes” all over this roster. Swinney knows it. The coaches know it. It’s just getting them dialed in.

I told one person that it almost reminds me of two days before the title game against Alabama. I wrote something on social media and shared it on our board. It was a short thought that said all of Clemson nation knew something special was about to happen, and they were descending on Tampa in droves to be there. They needed to be there.

Walking around Tampa Sunday afternoon, I should have been amazed at the orange blanket I saw.....but I wasn't. Clemson fans young and old have shown up to support their team. There is a reason they've shown up. Some little voice inside them, so feeling deep down inside their orange-colored heart, told them to be here for what will be a magical moment Monday night. Much like migratory birds follow some unknown map they can't explain, some instinct, these fans have descended on Tampa because they expect something special to happen.

There are middle-aged men wearing old Clemson hats, the same hats their dads wore to the 1981 Orange Bowl, and by wearing them they are building a bridge between the past and the present, the old and the new. Young children are following their parents, and they know they are going to have a memory they will tell their children about.

All of Clemson is here. People from Kentucky and South Carolina and even California are here in body, but there are soldiers in Afghanistan, airmen in the Middle East, sailors in the Pacific and Marines guarding embassies across the globe who will be here with us, if only in spirit. All of Clemson will be here to see what will unfold.

Many of you will carry the memories of loved ones with you, loved ones who would have wanted to see this day. When the confetti falls, a small part of you will smile, knowing they are looking down and celebrating with you.

The ghosts of Clemson's greats, whose spirits are forever a part of the lore of Death Valley, are waiting. Former players who are still alive have traveled to Tampa in droves, realizing that even though are not a part of this team, what they helped build, what they sweated and bled for, will reach a pinnacle and that their contribution means just as much as the current players.

If you could walk into the locker room tomorrow night before the game, you would get a tear in your eye, and you would tell those players that when they walk out on the field, they carry a piece of all of you out there. They aren't out there alone, the spirit of Clemson nation walks and runs with them. You would tell them that this win isn't just about 2016, it's about justification for all the sweltering noon kickoffs in September, the rain against Notre Dame and countless cold nights on the road at Wake Forest.

It's coming. You can feel it, can't you?

I feel it again. This team has the makings of something special, and for me it all begins Saturday in Death Valley. To me, Saturday’s “meaningless spring scrimmage” is the start of something big.

We are all going to watch the quarterbacks – can Kelly Bryant hold off the challenge of Trevor Lawrence, Chase Brice, and Hunter Johnson? Who steps up and grabs a starting spot at receiver? Which members of the secondary will show they are prepared to step into a primetime role?

Those are the three biggest things we will all be watching. But, it goes deeper than that.

It’s another chance to tailgate, to see friends we haven’t seen in a while. The azaleas are blooming, a big Tiger paw is painted on Bowman Field and Death Valley awaits the orange-clad faithful. It’s another chance to see Christian Wilkins and Clelin Ferrell and Adam Choice and Austin Bryant and Trevion Thompson at TigerWalk, and it’s the opportunity t welcome the new guys into the fold.

The stadium will once again hear the sounds of Tiger Rag, the players will run down the hill and the laughter of small children will echo across the tailgates. It is, quite simply, a wonderful place that grows even more magical on a football Saturday.

And this one? It’s the first of many special Saturdays in 2018, and you’ll be able to say you were there to see it all begin.

Come on, Dabo. Spot the ball.